The Van Apfel Girls Are Gone by Felicty McLean 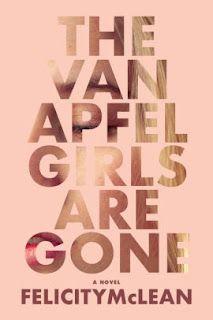 Who is responsible when three sisters go missing? It's a question that lingers in the debut novel The Van Apfel Girls Are Gone by Felicity McLean. Even at the end of the story, it still haunts Tikka Malloy.

1992 is the summer of a loss of innocence in Australia. The Lindy Chamberlain story played as a soundtrack in the background as the courts tried her for murder although she said a dingo took her baby. It's the soundtrack that still haunts Tikka Malloy, twenty years later.

In 1992, Tikka was eleven, and she and her sister, Laura, spent all their spare time with the Van Apfel sisters, Hannah, Cordelia, and Ruth. However, the Van Apfel household was ruled by Mr. Van Apfel, a religious zealot, and anything he did was approved by his wife. Tikka and Laura witnessed family Bible study, and thirteen-year-old Cordie's rebellion. Neighbors witnessed even worse, but no one told.

No one spoke up when Cordie didn't come to school. No one spoke up when she broke her arm, although some said she jumped out of the tree rather than fell. Tikka and Laura didn't speak up when the two older sisters planned to run away, with Laura's assistance. Although the always curious Tikka asked question after question, it wasn't until she was 31 that she asked her father and older sister about that summer. Why did no one speak up when the police sent units and helicopters and dogs to look for the sisters on the night they disappeared?

Twenty years after the events of that summer, Tikka is still so haunted by the missing sisters that she sees Cordie on sidewalks, in parking garages, and she stops her car and chases after women who turn out not to be the missing Van Apfel sister. Tikka still doesn't know if she and Laura should have told what they knew or suspected. After a terrible incident involving Cordie's pet mice, she admits, "Lor and I never told anyone what we witnessed that day, so no one could be blamed for not knowing...I guess I figured if I never said the words out loud, then maybe the terrible things we saw never really happened. So we kept our mouths closed, like we squeezed our eyes shut. Our family of four blind mice."

That sounds like an intense and gripping story. Think yours is the first review I've read of it. It might suit me at some point. Will keep it in mind.

That's what it is, Kay, a keep in mind book.

I think it's a bit too uncozy for me.

Sounds good. I haven't read a whole lot of fiction set in Australia, so I'm always curious about something like this one. Thanks for the review.

You're right, Gram. And, it has it's weird moments.

You're welcome, Sam. For Australian mysteries, I love Garry Disher. Or, if you're looking for historical Australia, you might want to try Sulari Gentill's books - pre-World War II Australia.