The Summer of Sunshine & Margot by Susan Mallery 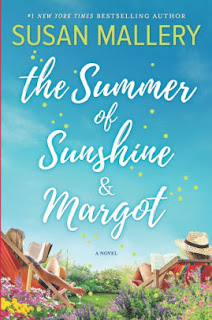 Looking for charming characters with a backstory that's a little different? I read for character first. If I don't like the characters, I don't go on with the book. That's why I'm not a fan of some of the biggest crime novels of the last couple years. I started them, but couldn't stand the characters. However, Susan Mallery's The Summer of Sunshine & Margot introduces two sisters I loved from the very beginning, an enchanting young boy, and two men who struggled while remaining good, kind men. This is one of the most endearing books I've read recently.

The Baxter sisters have always been unlucky in love. In fact, it's a family trait. Fraternal twins Sunshine and Margot Baxter were raised by their great-grandmother after their mother deserted them. She had also been deserted by her mother. The two sisters repeated their family bad habits. Margot continually returned to Dietrich, a man who took her for granted. Sunshine, a beloved nanny, would drop her charges if any man invited her to travel the world with him. This summer, though, both women are determined to change their lives.

Margot has it together professionally, despite her pathetic love life. She's an etiquette coach, and after meeting with Alex McNichol, she's hired to work with his mother, actress Bianca Wray. Bianca is engaged to a career diplomat. At sixty, she's still as gorgeous as ever, but she's worried about her reputation as a free spirit. Alex worries that his mother will never be able to settle into a restrained life. As part of the work arrangement, Margot is to move into the renovated monastery, Alex' home, where Bianca is currently living.

Sunshine's latest job is as a nanny for Connor, a young boy's whose mother died. She might be attracted to Connor's father, Declan, but she's going to change. She doesn't want to be treated as a beautiful sex toy. She yearns to be a wife and mother. At thirty-one, Sunshine has enrolled in college, although she's scared of her first math course in years.

The Summer of Sunshine & Margot is a witty romance with likable characters. There's quiet humor in this book. I appreciate the love and friendship between the two sisters. I loved Connor, Sunshine's charge, a little boy obsessed with ants. Yes, early on it's obvious that the two women will fall in love with their employers. But, it's fun to observe the stumbles, the dance, the respect the two men show for women. It's a contrast to the other men the Baxter women have dated. If you're looking for a light, enchanting beach read, Susan Mallery has written one. If, like me, you appreciate likable characters, you might want to try this book for a change of pace.

*****
FTC Full Disclosure - I received the book to participate in the blog tour.

This sounds great, Lesa. I have never read anything by Susan Mallery, but recently she sent me one of her older books, for no reason that I can figure out. I will give her a try.

It's just a comfort read, Margie, with good characters.

I read and liked her California Girls. I will look for this one. Thanks.