The Shallows by Matt Goldman 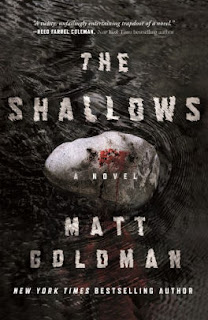 Every time I discover a new author thanks to a book I'm given to review, I count myself lucky. The Shallows is Matt Goldman's third Nils Shapiro novel, but I haven't read the two earlier ones. As I often do, I'll suggest you start with the first, Gone to Dust. After all, it was nominated for Nero and Shamus Awards.

Nils Shapiro is a private investigator in Minneapolis, working with his best friend Anders Ellegaard. It's Ellegaard's wife who is responsible for Shapiro's latest case. When Todd Rabinowitz' widow finds him dead in the lake, murdered, she wants Shapiro on the case, and calls Ellegaard's wife in the middle of the night. Shapiro agrees to find the killer, but he questions the widow, and then lets the cops believe he didn't take the case. That's one way to become popular. Before he knows it, Rabinowitz' law firm, the local police, and a politician try to hire him to find the killer.

Murders, bomb scares, kidnapping, cooperation with the FBI. It's just all in a day's work for Nils Shapiro. While he juggles multiple clients, he also has to deal with his personal life, his ongoing relationship with his ex-wife. Even that situation becomes more complicated.

I'm not going to write more about the story itself. However, The Shallows and Nils Shapiro are favorites this year. I like the voice used in this book. Shapiro is an intelligent PI. He doesn't fall for stupid tricks, and he knows a few of his own. I like his friends and the couple people he works with. I like his witty comments and his view of the world. Most of all, as I said, he's an intelligent PI who reminds me of one of my all-time favorites, Robert B. Parker's Spenser.

This is the point where I usually suggest you read the first in the series. I did buy Gone to Dust for myself.

Sounds great, and all three are currently on the shelves at my library!

Our library system has all three - the first one is on hold. You do a fine job of adding to my TBR pile.

I picked up the first today at the Iibrary.

I'll be curious to see what you all think of the first book since I didn't read it. But, I try hard to add to your TBR piles!

I put the first in the series on my library list under the category next. I liked the sound of it on Fantastic Fiction and since he was a comedian and also wrote for TV comedies I expect the characters will have a sense of humor.

I just started this and have read the first two as well. Really liked the local angle, since I live in Minnesota! I like his voice too, and the secondary characters bring a lot of life to the story.