The Mausoleum by David Mark 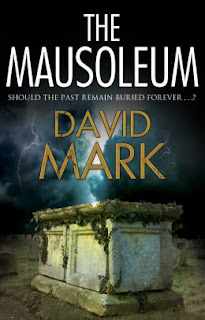 David Mark's standalone thriller, The Mausoleum, is a difficult book to discuss. The flap doesn't do it justice, but to reveal too much more will give away the story. At the same time, it was also a difficult book to read, told in alternating chapters by two women, with flash forwards from 1967 to recorded transcripts in 2010. It was not easy to follow the story, but it was compelling, and I ended up ordering the first in the author's police procedural series. All in all, this book is a deceptive tangle.

It all starts when Felicity Goose, taking flowers to her mother's grave, finds Cordelia Hemlock lying in a grave in the cemetery. All the villagers in Gilsland, England know of Cordelia, the woman living in the big house whose young son died nine months earlier. Cordelia is wandering through life with no purpose now that Stefan is gone. But, the events of that day will shock Cordelia into action, and she'll drag Felicity with her.

Felicity warns Cordelia there's a storm coming, but neither woman expects lightning to strike a tree that falls on a nearby mausoleum, splitting it open. They both see a man's body tumble out. He's dressed in a blue suit, and he appears to have died much more recently than he should have to be in that mausoleum. Felicity drags Cordelia back to her house, in the pouring rain, but she's reluctant to agree with Cordelia that they saw a body. When Fairfax, a neighbor, stops in, they tell him about the tree, and he rushes off to check on it. However, Felix is killed in a car accident, and, when people check, the body is missing from the cemetery.

While Felicity mourns for Fairfax, she's also caught up in Cordelia's plans to discover the truth about the missing body. And, that truth might just lie in all the stories Fairfax gathered from the neighbors, from the POW camp in the town, and from the RAF base. If Felicity and Cordelia can find Fairfax' writings, they might find answers. But, some villagers and a few powerful outsiders want the truth to stay buried in the past. However, Cordelia's determined to find answers, and Felicity discovers an unknown strength in herself as she questions friends and her own family.

The Mausoleum is a story with roots going back before World War II and complex links to the war years. Although Felicity and Cordelia's linked story begins in 1967, the final answers won't be revealed until 2010. As I said, it's a tangled, bleak mystery with a haunting conclusion. It's complex, intricately plotted, and difficult to read at times, with alternating storytellers and village dialect. I guess the best word for David Mark's book is disturbing.

Oh I thought that author sounded familiar and I will be interested in what you think about the first of his series books.
I read the first one recently and after much thinking I started the second but have decided that his series just isn't for me. I was caught up in the story and character but really did not enjoy the experience. Thus not going on with the second book and the rest.
Maybe you will like it all better than I did. I'll try this book, he is an intelligent writer and maybe I will like these characters better than his police series.

I'll be interested, too, Diane, although my must read pile is much larger than my hope to read pile at the moment, so I'm not sure when I'll get to it.

Ah, is it that disturbing word, Kaye?