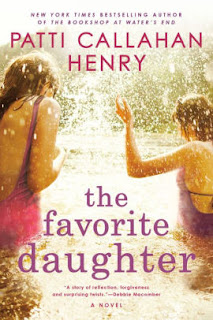 If you start Patti Callahan Henry's latest novel, The Favorite Daughter, and it feels as if it's just another runaway bride story, hang in there. While the first sixty pages may seem familiar, the rest of the book will break your heart. It's a story about family, finding home, and memories. And, right now, it's one of my favorite books of the year.

Ten years ago, Lena Donohue was about to marry the man she loved when she witnessed a scene she couldn't forgive. She ran, and didn't stop for ten years. Now writing under the name Colleen Donohue, she a freelance travel writer living in New York City, and traveling the world. And, she's only made short trips back to her beloved childhood home in Watersend, South Carolina, trying to avoid her sister and brother-in-law. She hasn't spoken to her sister Hallie in those ten years.

Then, Colleen's brother, Shane, calls her home. He's the one managing the family pub, the Lark. He's also the one who has taken their beloved father, Gavin Donohue to the doctor after noticing his memory loss. Now, he needs help from both of his sisters even if they're not speaking to each other. They were already planning their father's sixtieth birthday party. Now, Shane wants them to work on a memory book with photos so they can try to remind Gavin who he is, as he slips away into Alzheimer's.

It's a turbulent few weeks at home. Colleen and Hallie struggle with their relationship, with distrust and anger. Shane is struggling to keep the family Irish pub afloat. And, Gavin is just struggling, knowing the diagnosis. He's happy to have his "lark" home, but he's angry at times, knowing he'll lose his knowledge and love of the Lowcountry waterways.

Henry's story of family dynamics is well-written and convincing. The Favorite Daughter is a beautiful story of family coming together, as they try to ask questions with no answers. "Memory forms us. What are we without out?...We are memories. They are the shape of our souls."

Here's a warning. The Favorite Daughter is a tearjerker. I probably cried through the last fourth of the book. But, it's beautiful, and memorable. Tributes to Gavin Donohue are scattered throughout the book. And, his own memory of love made me cry. For me, it was hard to separate my love of Ireland with Gavin Donohue's story. "Someday I'll take you there, take you to the land of eternal green, and staggering cliffs you can't imagine even with the best of your imagination, to the land where fairies live in the knots of old oaks and the ocean is always thrashing itself against a land so beautiful there's not another like it."

Patti Callahan Henry's novel is not a story of Ireland. In fact, it's set in South Carolina. But, it's a story that whispers of memories, of family, of music and laughter. Those traces, those whispers, are necessary in a novel about a man losing himself and his story. For me, those traces of Ireland are magic. "I arrive in a place where all the greens in the world were born." It's one of the best books I've read this year.

*****
FTC Full Disclosure - The publisher sent me a copy of the book.

I recently acquired this book and look forward to reading it before long. I'm always attracted to stories of families dealing with Alzheimer's and so that's what piqued my interest. Good to know that it resonated with you, Lesa!

It was handled with so much love, Kay. I hope you enjoy it!

I loved it too. And I cried. Patti Callahan Henry never disappoints.

You were right on both books, Kaye. I just finished Queen Bee, and loved it, too.

Want to read it so much! The print is too small for my eyes. I have a model T Kindle and have told the many of the newer books cannot be read on it I have Mild Cognitive Impairment and have friends who had the same diagnosis and lately have been told that they will quickly go into dementia. Hard to find the best words to comfort them.

On Ireland, I had promised my father that I would go there before I die. A big branch of his family are from Donegal. More determined than ever to do the trip.