At the end of last year, when I learned Midnight Ink was folding, I offered to interview their published authors on my blog. J.A. Kazimer's mystery, A Shot of Murder, will be released June 8. I hope you enjoy this interview as much as I did. As a librarian, I really appreciated Kazimer's final answer. Thank you, J.A., for taking time for the interview.

J.A., would you introduce yourself to readers?

I’m a writer from Denver, Colorado. In my dark past, I’ve written many novels, mostly messed up fairytales. But now, I’m focused on whiskey. Both drinking it and writing mystery novels about making it.


Would you introduce Charlotte Lucky?

Charlotte Lucky, the main character in A SHOT OF MURDER, is much easier to introduce. Charlotte is a D-list actress who returns to her family home to run Lucky Whiskey after her grandfather suffers a heart attack. 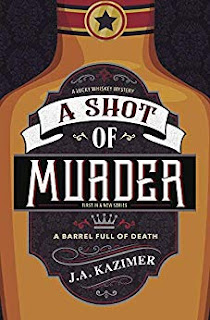 Without spoilers, tell us about A Shot of Murder.

Ten years after leaving the small town of Gett, Florida, for Hollywood stardom that never quite materializes, Charlotte "Charms" Lucky returns home to run the Lucky Whiskey distillery while her grandfather, Jack, recovers from a major heart attack.
Making whiskey is harder than Charlotte imagined, especially with longtime rivals and resentful townsfolk interfering at every turn. She'll need more than a lucky charm to keep the family afloat after she discovers her former high school boyfriend's pickled corpse in a Lucky Whiskey cask. Soon after, Jack is arrested for the murder.

Charlotte has one shot to clear his name and save the family business, and that is to find the real killer among a town full of suspects.

Tell us about the research you did for the whiskey distillery.

So much research went into this book. In fact, my liver hurts just thinking about it. Not only was I forced to taste test my way through multiple whiskey brands, I had to visit distillery after distillery to learn the ins and outs of the whiskey making process. And of course, try each whiskey type.

It’s my job. I take all my research very seriously.

In truth my favorite part of researching wasn’t the drinking, but the stories and rare factoids I learned, such as how rotgut whiskey got its name. Let’s just say, I’m glad I didn’t drink cheap whiskey in the 1800’s. Think pickled corpses.


Of course, we all want to know about your career as a private investigator. Do you have any exciting or funny stories you can tell us about that job?

I worked as a PI a long time ago, so the statute of limitations is up for quite a few tales. But one of my favorites was when I was searching for an infamous celebrity who had skipped out on a few bills.

Mind you, it’s perfectly legal to sort through a person’s trash as long as that trash isn’t on their property. Once it’s on the street for pick up, your trash is fair game.

One way some PIs (not me of course) get around this is by knocking over the trash can. Therefore whatever rolls out into the street is ripe for searching. This may or may not have happened in the case of this infamous celebrity.

Except, the trash wasn’t the celebrities, but instead, some who had about twenty pounds of marbles inside it. Now don’t ask me why someone was throwing away that many marbles. Maybe they were a collector, or far more likely, a serial killer.

All I know was, marbles exploded from the can as it hit the ground, rolling down the street at a rapid speed. Cars swerved out of the way of the wall of marbles as a man in boxer shorts flew out of his house, screaming. One look at the guy proved I had the wrong address, and a big mess to clean up down the street.

I did eventually find the celebrity. And now she may or may not be on season 16 of Worst Cooks in America.


When people come to visit Denver, where do you like to take them?

Denver is an amazing city. Everyone says that about their hometown, but in my case, it really is. We have so much to do around town. My first suggestion is, of course, a visit to my favorite whiskey distillery - Stranahan’s Distillery.

After that, there is a visit to BookBar, which combines the awesomeness of a bookstore with a bar. They do a ton of author events and meet and greats.

The Denver arts scene is amazing as well. Plenty of music, culture and fun to be had. Come for a visit, and you won’t want to leave.

Everyone takes a different path to publication. How did you become a published writer, and, for that matter, why a mystery writer?

My path to publication is one of persistence. I had over a thousand rejections before landing an agent and selling my first novel in 2010. I just never gave up.

Since then, I’ve had over 15 books published. Mysteries have always been what I’ve read, and even when not writing a straight mystery, all my novels involve dead bodies and solving some sort of crime. Yep, even when writing about the tooth fairy.


If you had to recommend 5 books to a person so they could get a feel for your reading taste, what 5 books would you pick?

This is the hardest question. I’d say A Shot of Murder is a lot like Jana DeLeon’s Miss Fortune Mystery series, and also like Joanne Fluke’s Hannah Swenson series but with whiskey instead of baked goods. There is a definite Janet Evanovich tone in terms of odd cast of character cast. That’s more than 5 books, so apologies.

What’s on your TBR (To Be Read) pile right now?

I fear you don’t have enough space on your site for the answer. But here’s what’s on top –


J.A., I’m a librarian. I like to end by asking you to tell us a story about you and a library or librarian.

First off, THANK YOU FOR YOUR SERVICE.

I owe my career to a librarian. As a kid, I suffered from severe dyslexia, and rather than give up on me as a reader as most teachers had, a librarian opened a whole new world to me with a record version of a Scooby Doo mystery. It came with a book to read along, which I did.

I listened and read along hundreds of times. I knew each word by heart. And that meant those words were recognizable on the page in other books. And I was reading!

My local library is a haven. I cannot express how much it means to my daily life. Libraries are resources we must protect.

That was one very fine interview, and I enjoyed getting to know the author and being introduced to his work. Good job on the part of both of you.

Lesa, thanks for featuring Midnight Ink authors. I'm a big fan of several, including this Kazimer gal, so will be following these posts with extra interest.

Nice to meet you too, Sam. And thank you again, Lesa, for having me.

Yay, PAT! I'm a bigger fan of Pat Stoltey. She's not only a great writer, she's an even better person!