Have You Heard? Alice Kimberly's The Ghost and Mrs. McClure

Sandie Herron is reviewing one of my long-time favorite series, Alice Kimberly's Haunted Bookshop Mysteries. The Ghost and Mrs. McClure is the first in the series. Today, Sandie reviews the audiobook.


The Ghost and Mrs. McClure 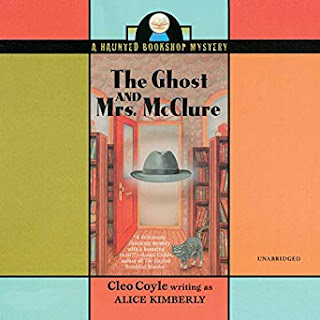 I almost did not listen to this book, yet I am so glad that I did.  As I switched on this audio version of the first in the haunted bookshop mysteries, a gruff male voice began talking.  I disliked his tone and his style.  Then a female voice continued, and her voice was pleasant and used present day syntax.  What we had was two distinct voices narrating this delightful story.  The male voice is that of Jack Shepard, the private investigator killed in 1949 in the bookstore that 30-something Penelope “Pen” Thornton McClure now owned with her aunt Sadie.  Buy the Book was renovated when Penelope invested the insurance money from her husband’s suicide into the store, relocating with her son Spencer to the Quindicott, Rhode Island store from Manhattan.  The construction crews had not scared away the ghost in residence.
Pen has the honor of launching bestselling author Timothy Brennan’s newest entry in his Jack Shield mystery series based loosely on Jack Shepard’s life.  Pen is disappointed to find the author rude, pompous, and unpleasant.  While speaking, Brennan reveals that Jack Shepard was actually murdered in that very store.  Then Brennan keels over dead!  During Brennan’s speech, Pen believes she hears a heckler in the crowd, and she hears the same voice later that evening.  She isn’t quite sure who this gruff fellow is, telling her she’s a doll.  He’s speaking in 1940s English filled with very different slang.  Putting together what Jack is telling her now with what she learned from Brennan’s speech, she realizes that she is talking with Jack Shephard, the ghost, speaking silently, in her head, where no one else can hear him.

Strange events begin to unfold as the store sells every copy of Brennan’s book including the 600 more copies ordered at the last minute.  The town is crowded with tourists.  The police have asked Brennan’s daughter and son-in-law, on hand for the signing, to stay in town pending the medical examiner’s findings.  Brennan’s publicist and her assistant stay as well.  With Jack’s help, Pen begins to piece together facts uncovered on a “dark and stormy night.”  The two bounce ideas around together and separately, ultimately solving, and then guiding others, to the murders.

I thoroughly enjoyed this story.  I liked it far beyond my initial impression, since I was confused by this gruff voice much as Pen was.  I found the juxtaposition of noir, small town issues, the hopes of a store owner, and the paranormal very appealing.  I am very much looking forward to the next entry in the haunted bookshop mysteries.