Gone Too Long by Lori Roy 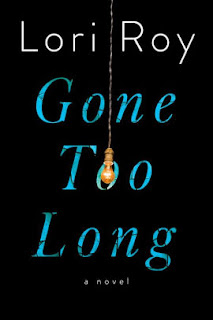 Lori Roy is the Edgar Award winning author of Bent Road and Let Me Die in His Footsteps. Her latest novel, Gone Too Long, is a creepy, disturbing account of a young girl and a community held hostage by the Ku Klux Klan. It's a compelling, issue-oriented story.

Ten-year-old Beth knows she isn't supposed to leave the house when her mother isn't there. But, when someone in a pickup truck throws a bag in the yard, she knows what's in it. Her mother has been warned before, and they've had flyers from the Klan. She never tells her mother about the flyer, and that night, Beth disappears.

Seven years later, Imogene Coulter, the daughter of the local Klan leader, has to suffer through his funeral. The town of Simmonsville, Georgia mourns his death. Imogene is still mourning the death of her son and husband who died in a car accident. She's the only one of three siblings who has not followed in her father's footsteps. She never wanted anything to do with the man. But, her mother asks her to do her a favor after the funeral.

Imogene is reluctant to enter the house that's next to the family house. She never knew what went on there, but her mother wants a cord to the house cut. When she tries to track the source of the cord, she finds a young boy locked in the basement. She rescues him just before the house catches fire, and the Klan members descend on the family home, determined to protect the reputation of their late leader. But, there's Imogene with a young boy, a symbol of secrets that the family and the Klan would prefer to bury.

I'm not usually fond of stories that use alternate voices as narrators. However, Roy is skillful in the use of two women's voices, women who tell of abuse and horror. Imogene's father-in-law's voice is almost as frightening. He's a man who was once a Klansman, a man who warns that people have "gone too long" without paying attention.

"Gone too long" without paying attention. Lori Roy forces readers to pay attention, interspersing the history of the Ku Klux Klan in between sections of the book. As readers will discover, Gone Too Long has layers of meaning in the title and the book. It's a frightening story.

Wow! This one sounds quite grim. Important topic, but grim. I've read another book by Lori Roy, but can't remember the name right now. I'll keep this one in mind.

It is grim, Kay, but excellent.

Another dark book that I will not be reading.

I have a lighter one for Wednesday, Gram.