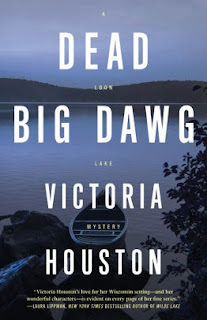 I have no interest in fly fishing, and I can live without most descriptions of nature in mysteries, but Victoria Houston's Loon Lake mysteries always catch my attention. Perhaps it's because Police Chief Lewellyn Ferris and her friend Dr. Paul Osborne are so passionate about fly fishing and their feelings about the river. Passionate, knowledgeable people are fascinating. And, Houston's latest book in the series, Dead Big Dawg, is an intriguing mystery, certainly not a leisurely paced environmental story.

Houston does have a knack for description when it comes to the outdoors, though. Here's the opening.  "Staring into the eyes of the great horned owl, the old woman died happy. They had been meeting like this for months in the dark, in secrecy. Watching one another, sometimes watching the creatures moving through the towering pines surrounding them. . .just. . .watching." When the woman is shot, the owl warns others, but people aren't savvy enough to catch the warning. If they had, other deaths might have been prevented.

Police Chief Ferris has so much on her hands, she doesn't pay attention when a fishing guide, a friend, mentions he's worried about the elderly lawyer who is nowhere to be found. Lew has a visiting granddaughter, drunk young men who endanger others by moving buoys, and, then two deaths. A powerful couple from Chicago has been shot at their home at Loon Lake. Lew's small town police force of three isn't equipped to handle large investigations. Dr. Osborne will serve as acting coroner, as he often does, but Lew will work with other neighboring teams. Then, the body of a young woman is found, supposedly drowned, until an EMT says it doesn't look like a drowning to him.

Tension builds in this latest mystery, alleviated only by community gossip and humor, and attempts to escape into fly fishing on the river. But, murder investigations always take precedence, and Lew and Dr. Osborne are dragged back to crime scenes several times. Even so, it's that astute fishing guide who starts to put a few clues together.

Not interested in fly fishing? Me, neither. But, I do love a good story with interesting characters and a small community. It doesn't matter if Dead Big Dawg is the nineteenth is the Loon Lake series. You might just want to jump in at this point. The water's fine in Look Lake.

I’m not into fishing although I do like outdoor nature scenes. This is one of my favorite series and I’m waiting impatiently to get it from the library.

Great characters in this series, Sandy. That's what I appreciate.

These characters sounded very familiar to me. This is a series I started years ago and never go back to reading. Thanks for the reminder. I'm putting this author back on my lists.

I’m not sure why everyone thinks the characters were so great.there was a lot of unnecessary descriptions of people doing random things. I read about 2 books a week and wasn’t impressed. This was my first by her. Perhaps others are better.

It's sort of a laid back series, Gram.

No, Anonymous. The books are about the same, so they just might not be for you. I think it's the small-town atmosphere, the peacefulness, plus the characters that appeal. But, people don't like the same books, or bring the same background to them. I'm sure there are others that are more appealing to you if you read about 100 books a year. Good for you! We need more readers.