Chai Another Day by Leslie Budewitz 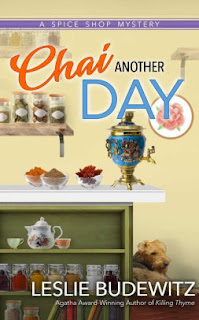 It's been three years since the last Spice Shop mystery by Leslie Budewitz, so it might take a little while to feel caught up with her protagonist, Pepper Reece. Fortunately, her series was picked up by a new publisher, Seventh Street Books. Readers can find the owner of the Spice Shop in Seattle Pike Place Market in Chai Another Day.

Seattle has changed. It's hot and dry this summer, but Pepper still needs yoga and massage as a break from her beloved shop. On her way to the second floor of a building for her massage, she overhears words of argument, but not enough to identify the speakers. Then, Seetha, Pepper's massage therapist is called to an emergency. It seems a murder victim is bleeding out on the first floor in an international antiques and import shop.

Pepper's actually a friend of Aimee, owner of the shop where her employee was killed. Because of that friendship, she feels a sense of responsibility, a sense of connection. She feels a little guilty that she didn't intervene when she heard the argument. While others, including one of the investigating police detectives, feel Pepper has no business sticking her nose into the case, she grew up with her mother's mantra, "Pray for peace and work for justice."

Chai Another Day is a cozy mystery with an amateur sleuth. However, it is also a story about connections and relationships. Pepper is dating a fisherman. She's falling in love, but he's only in Seattle for half the year. He fishes in Alaska for the other half. Can she build a solid relationship based on his presence when he's in town? Then, there's Pepper's mother, who stayed in Seattle to try to find a comfortable second home while Pepper's father returned to their snowbird home in Costa Rica. And, of course, there's the entire staff at the Spice Shop who come with their own baggage at times.

Budewitz mixes love, family and friends, along with mystery and hints about spices, into a sweet blend in Chai Another Day. Fans of the series will enjoy catching up with Pepper and her shop, while newcomers will appreciate the list of "Who's Who in Pepper's World", the cast of characters. It's going to be interesting to see what Leslie Budewitz herself says in tomorrow's interview on the blog.

*****
FTC Full Disclosure - I received the book to participate in a blog tour.
Posted by Lesa at 3:00 AM

Thanks for your review. I'm really looking forward to reading CHAI ANOTHER DAY ~

Glad to see this series was picked up by another publisher. The setting and atmosphere Leslie Budewitz creates are wonderful. Looking forward to the interview on Sunday.

You're welcome, Celia. I hope you enjoy the book!

She really does emphasize both setting and atmosphere in this one, Grandma Cootie.

Lesa, so glad you enjoyed the return trip to Seattle with me! And thank you, Celia and Grandma Cootie, for the kind words!

I'm actually IN Seattle right now and headed to the Market to eat, shop, and sign books at a REAL Spice Shop. So. Much. Fun.