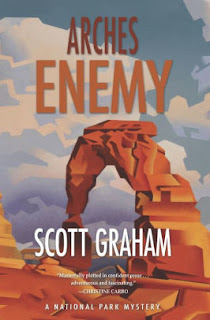 While the setting and environmental history of Arches National Park is appealing in Scott Graham's fifth National Park Mystery, I found his protagonist less so. Archaeologist Chuck Bender is knowledgeable, though, and he may appeal to other readers. I didn't care for his sarcasm or his rush to accuse others of wrongdoing. Although he often proved right, at times he seemed to be a bully. However, anyone who reads Arches Enemy will understand. It's hard to be a kind person when your mother is a grifter.

Bender brings his wife, paramedic Janelle Ortega, and his two stepdaughters with him to Arches National Park in Utah. He's been hired by the park ranger in secret, to chart a cave that may reveal the unknown history of the Native Americans in the area. But, before he can get far into the project, one of the arches collapses, taking a local woman with it. She wasn't supposed to be on top of the arch, but Bender quickly jumps to the conclusion that the collapse was not her fault. He blames the seismic trucks that pound away, exploring for petroleum and natural gas. And, he's quick to accuse the company's project manager of murder. When he sneaks around to explore the remains of the arch, he realizes that someone might have targeted the arch, and maybe even the victim.

It doesn't take long for Bender to get caught up in investigating, at the expense of the job he's paid to do. When several other deaths occur in the park, he's suspicious, and finds himself eyeing his neighbors in the park's campground. He's determined to protect his family from violence.

However, Chuck has another distraction. His mother, who raised him halfheartedly between men and con jobs, is there in Moab. He's reluctant to introduce his new family to her, and her proclamations and comments as a "seer" are over-the-top. Janelle dislikes and distrusts her, and she's the one who eventually points out that Sheila, Bender's mother, is the thread that links all the deaths and the community. Everyone seems to know Sheila.

As I said, readers who want to read about the national park and the environmental dangers will appreciate the book. Those of us who read for character may be less satisfied with the type of humans and their behavior in Arches Enemy.