Such a Perfect Wife by Kate White 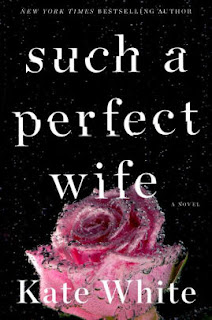 It's been a little while since I read one of Kate White's Bailey Weggins mysteries. This series just gets better, and there's no reason you can't pick it up with Such a Perfect Wife. I have a weakness for mysteries featuring journalists, and this one was a page turner that I couldn't put down.

Bailey Weggins has been writing true crime books lately, so when a new online magazine asks her to cover a story in Lake George, New York, she's eager to turn investigative reporter again. Shannon Blaine went jogging one morning, and never returned. Because she's a beautiful blonde wife and mother, her disappearance caught the eye of Bailey's editor. Shannon has only been gone for two days when Bailey arrives in town. She has the chance to see the search parties, talk briefly with a couple family members, and get a motel room before more media moves in. She does catch the eye of a local reporter, though. Alice Hatfield has been covering the story, and she's not happy to share her sources with an out-of-town reporter. But, Bailey gives Alice the respect she's earned, and the two form a grudging partnership.

When Bailey receives an anonymous phone call with a tip saying Shannon wasn't such a good Catholic girl, she turns to Alice for suggestions. The two reporters end up at an old retreat center owned by the local diocese. It's there they find multiple bodies. Although they're both aware they might have made themselves targets for a serial killer by finding the bodies, Bailey and Alice are determined to stick with their investigations and their stories.

This riveting story kept me turning pages. Yes, when I look back at it, it all makes sense, even the death I wasn't expecting. I should have expected it. But, isn't that the point of a good story? It distracts the reader enough that even the reader used to crime novels can be surprised.

As I said, even if you've never read any of the Bailey Weggins mysteries, there's no reason you can't pick this one up. If you're looking for an entertaining mystery, try this one.

Here's another series I started and then moved on...maybe this is the book to get me back to it. Thanks.

I did, too, Gram. But, I really liked this one.

Thanks so much Lesa, from Kate White. Loved the review!

Loved the book, Kate. Thank you for writing it!