When Wiley Saichek of Saichek Publicity asks if I'll host a guest author, he usually suggests that the author write about libraries. Wiley knows how much I appreciate those types of posts.

Roger Wall lived throughout the United States before ending up at the University of North Carolina at Chapel Hill, where he studied fiction writing. He lives in New York City and the Catskills. During-the-Event is the 2018 Permafrost Book Prize in Fiction selection. Visit his website at https://www.rogerwall.net.

Here's the summary of During-the-Event. 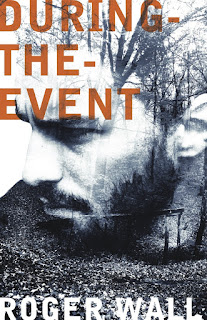 For D.E., only two certainties exist: his grandfather is dead and life will never be the same.    During-the-Event is a dystopian adventure that roams across a fallen United States, introducing an unforgettable cast of characters along the way. In the near future, climate change has ravaged the United States, leading the government to overcorrect through culls and relocation. Those who survive the mandated destruction are herded into “habitable production zones,” trading their freedom for illusions of security. The few who escape learn quickly that the key to survival is to stay hidden in the corners of the country. For seventeen years, During-the-Event, or D.E., has lived free in a pastoral life with his grandfather in North Dakota. But when death reaches their outpost. D.E. is forced on a journey that will change his life—and reveal surprises about his past.Once taught that strangers are only sources of pain, D.E. must learn to trust the people he meets on his journey. During-the-Event is a soaring coming-of-age story that grapples with achingly familiar issues: coming to terms with loss and loneliness, finding what our identities really mean, and searching for love in an often strange and bewildering world.

*****
Thank you, Roger, for taking time to write the following post.


Books and libraries, then and now

As a child, books, except for the Bible and two sets of encyclopedias, were not omnipresent in our household. The Bible was a source of stories early on, as was perhaps an anthology of children’s stories. My elementary school bookshelf didn’t contain literature, though, but a collection of manuals on how to survive in the wild. It’s hard to believe anyone actually tested this information, or used it; I read it as adventure writing. It stoked my imagination for grand backyard adventures.

When I was fourteen, I read J. D. Salinger’s The Catcher in the Rye. It wasn’t a school assignment but the first novel I bought on my own—a maroon paperback from a mall bookstore. I read it one Friday night, alone in bed.

I suppose I liked what a lot of people like about the book: the first person voice, the disgust with phonies, and the adventure of trying to be seen as an adult in a New York that no longer exists. Salinger’s personal mythology, a hermit in the Vermont woods who shunned people and wrote, also appealed to me.

In college I sought out libraries for their tranquility and privacy, an escape from group living and dormitories. Yet, it wasn’t until I began going to the library with my own child that I came to appreciate the book-lending service of libraries. Once or twice a week we spent a few hours in the Philadelphia Free Library before loading the stroller with the allowable limit of books. My son never minded walking home.

For a few years in New York I made a home in NYU’s Bobst Library. Early in the morning or during academic breaks the Bobst Library was quiet, and the stacks were filled with rarities. Once I found a book from the early twentieth century about the country Chad, with hand-drawn maps of exploration routes. I couldn’t believe it wasn’t in a rare book collection. Now I wonder if it has been sent off-site for deep storage or scanned into a digital file with the original thrown out to make room for more computer terminals and collaborative work areas. A realtor once stood in my apartment and pointed to the bookshelves. “Books,” he said, “you don’t see many of them anymore. It’s a nice touch.”

Most recently two of my favorite authors published books. Haruki Murakami (Killing Commendatore) and Michael Ondaajte (Warlight). Both of these works share the characteristic of creating realities that the reader can’t resist occupying. A another book, Lincoln in the Bardo, by George Saunders, also achieves this state, as does HernanDiaz’s In the Distance.