Cleaning the Gold by Karin Slaughter and Lee Child 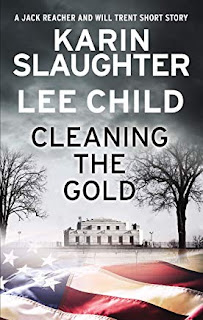 This past weekend, I actually read an eBook. I don't often, but Karin Slaughter and Lee Child teamed up for a short story, Cleaning the Gold, and I can handle reading short stories digitally. Best of all, for those of you who don't care to read eBooks, it will be available as a paperback next week.

Slaughter's character, Will Trent, is an investigator for the Georgia Bureau of Investigation based in Atlanta, but his boss sends him to Kentucky to work on a cold case. More than twenty years earlier, there was a shooting of a policeman in a small Georgia town. That policeman just died, so now it's a murder investigation. And, the local librarian described a man that fits Jack Reacher's description.

After someone pulls a few strings, Trent is sent to Fort Knox where he's assigned a physically taxing job working next to Jack Reacher. Trent may be tall, but Reacher is taller and bigger. Neither man is much for conversation while they spend their days cleaning and moving gold bullion. But, when Reacher tracks an officer, and Trent follows Reacher, they have a discussion. Jack Reacher also has a case. He's looking into an officer who is an enforcer when someone gets over their head with a loan. But, this man enjoys picking on women and children.

While both men are interested in a resolution to their cases, it soon becomes clear there is something seriously wrong at Fort Knox. If they team up, Trent and Reacher might be able to handle the trouble without throwing the entire country, and the world, into chaos.

Cleaning the Gold is a short story designed for those of us who are already familiar with both characters. There's little introduction because there's none needed for fans of the two bestselling authors. Just settle in for an entertaining story if you pick up the book.

I like Reacher, Kay. I haven't read many of the books, just enough to know I like him. But, I've read several short stories and enjoy them. The ending is sort of anticlimatic here, but how they get there is interesting.

I've read Slaughter's earlier (Grant County) series, but have never read the Will Trent series. I have read all the Reachers (maybe not the latest one), as well as a number of short stories by Child. Will look for this one.

Sometimes, as you know, Jeff, a short story is just right.

At 120 pages, it sounds like a novella and not a short story to me. Also sounds interesting.

I think novella, too, Kevin, but they called it a short story.

I will look for this when it comes out in PB. Thanks for the heads up.