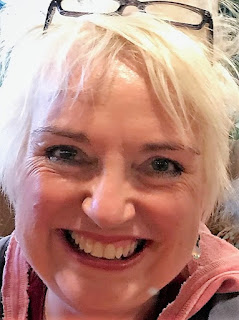 If you've ever met or heard award-winning author Catriona McPherson, you'll be able to "hear" her voice and humor in the following interview. Catriona discusses her latest book, Scot & Soda, her life and career. Thank you, Catriona.


Catriona, Would you introduce yourself to readers?

Certainly. I’m fifty three (although when did that happen?) and I’ve been a full-time writer for fourteen years. I was a part-time writer for five years before that and, back in the mists of time, I was once a linguistics professor. I’m Scottish and I lived there until 2010 when I immigrated with my husband, who’s a professor at the University of California. What else? Cats. Baking. Yard sales. Ohhhh, it’s wild life.

Would you introduce Lexy Campbell?

She’s also Scottish and she also followed a man to California. But he was a pillock and so now she’s divorced. She’s a marriage guidance therapist – a thing I could never do; I couldn’t leave the space for people to work things out on their own. I’d want to say “Loser! Dump him.” or “Pull the other one, sunshine. I didn’t just fall off the turnip truck.” Mind you, Lexy’s therapeutic style isn’t a million miles from that. 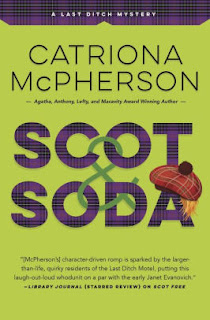 Tell us about Scot & Soda, without spoilers.

It opens at the Halloween-cum-house-warmer she’s hosting on her houseboat. Her fridge is titchy so she put the beer in the slough tied to a rope. As she hauls it up again – thinking it’s puzzlingly heavy – she congratulates herself on being done with corpses, cops and clues. Guess what happens next. Go on, guess.

So by chapter two, Lexy and her pals are on the case again. That’s Todd and Roger, a pair of doctors, Kathi and Noleen, the Last Ditch Motel owners, Della and Diego, permanent motel residents. I was so happy to get back to them again!

How many of Lexy’s experiences (not the bodies) are based on your experiences as a transplant to the United States?

Ha. Yes, it’s all completely autobiographical (except that none of it actually happened).  I gave Lexy a name – Leagsaidh – that’s even harder to spell and/or pronounce than mine, after five years of having people say “Katrina? Really? Why’s there an “o” in it?” (The answer is because Scots Gaelic got all the vowels they didn’t need for Polish.)

In the first book Lexy stumbled around making ten mistakes a day, just like me: Why won’t the petrol come out of the nozzle? (Because you have to pay for it first.); Why is that mouse so angry? (Because it’s a gopher); How in the name all that’s holy did gummy bears ever catch on? (No clue.) These days, in real life and in the new book too, the Scot doesn’t make such enormous clangers quite so often.

What do you miss the most about Scotland?

Oof. Well, for a start, I go back every year so I’ve got no business claiming to miss anything. Imagine those early emigrants who left on a ship, waving a hanky, knowing that was it. But in the eleventh months between visits, I miss food you can’t get here. Pork pies, fresh herrings, Cumberland sausages, haggis, Bramley apples, Persian pomegranates . . .

What do you love the most about the United States?

Food you can only get here! Russet potatoes, local oranges, mission figs, nachos Mexicanos carnitas, persimmons, the glut of avocados that makes guac a good lunch-time standby. And the post office; I adore the USPS.

I was a miserable and rubbish linguistics professor. And I was on a weekly commute from home, paying rent in a distant city. Also, JK Rowling was writing Harry Potter in that Edinburgh coffeeshop, Oprah was in full sail, and every woman between thirty and sixty was in a book club. Suddenly, writing didn’t seem like the pipe dream I had been hiding my whole life. It felt possible. So I resigned and sat down to find out if I could do it. That first book went in a drawer after forty rejections, but the next one got published and got shortlisted for the Ellis Peters historical dagger (the UK Edgars, more or less).  I’m still writing the historical series that began with that book.

What a great question. I’m stealing it to ask Cathy Ace when I do her toastmaster interview at Left Coast Crime in Vancouver next month. I’ll credit you.

5. Kate Atkinson Case Histories
4. Margery Allingham The Tiger in The Smoke (or The Beckoning Lady)
3. Angie Thomas The Hate You Give
2. Dorothy Whipple The Priory (or High Wages (this is hard))
1. Stephen King Lisey’s Story

Even though we might not recognize some of the titles, what books were your favorites as a child?

Enid Blyton’s Mallory Towers series and St Clare’s series (both about boarding schools). There were two novels about ponies that I read over and over again, even though I’ve never cared a whit about ponies. They were Wish For A Pony by Monica Edwards and Prince Among Ponies by  Josephine Pullein Thompson. Six books about ballet, starting with Ballet for Drina by Jean Estoril (even though I couldn’t have cared less about ballet either).  But I also read and re-read Charlotte’s Web, The Funny Guy, and Roald Dahl. A friend brought back Are You There God, It’s Me Margaret from the US and it blew us all away.

Cat, I’m a librarian, and I usually ask the same question at the end. Tell me a story about you and a library or librarian. However, I don’t know how similar libraries are in the U.S. to ones in Scotland. If you’d rather tell us about a Scottish library, please do.

This is another great question. I am a lifelong fan of libraries. My mum worked in our local public library and I worked in the library system in university holidays. Here’s my favourite thing about libraries in my whole life. When we immigrated, Neil and me, he was on the international expert visa (the Austin Powers visa, I call it) and I was on the spouse visa (or the chattel visa, we could say). Until we got our greencards, I wasn’t allowed a bank account of my own, or a credit card. I wasn’t allowed to work. I wasn’t even allowed to volunteer. BUT – I was allowed to join Yolo (yes, really) County Library. That library card was my first official proof of existence here in the US. I treasured it. When my greencard came through and I was allowed to work, the first public speaking event I did was in my local library, to say thank you.


ABOUT THE AUTHOR
Catriona McPherson was born in South Queensferry, Scotland and lived there until 2010 before immigrating to Davis, California. A former academic linguist, she is now a full-time fiction writer of the multi-award-winning and best-selling Dandy Gilver detective stories, set in Scotland in the 1920s. Catriona also writes a strand of award-winning contemporary standalone novels including Edgar- finalist The Day She Died and Mary Higgins Clark finalists The Child Garden and Quiet Neighbors, just to name a few. Much like her own life, McPherson’s Scot Free and Scot & Soda follows amateur sleuth Lexy Campbell from Scotland to California in her newest cozy-style mystery series.
The author is also a proud member of Sister in Crime, Mystery Writers of America, The Crimewriters’ Association and The Society of Authors.

When not writing, Catriona enjoys reading, gardening, cooking and baking, cycling in Davis and running through walnut orchards. She’s already visit 27 states in the United States and has been
practicing an extreme form of Scotch thrift, from eating homegrown food to dumpster diving and skip-surfing for major appliances.

It was only while watching Jackie Weaver's character in SECRET CITY that I realized that "Catriona" was pronounced "Katrina."

PS - Edinburgh is one of my favorite cities.

It seems that whatever is in your blog for the day I find a book to add to my list. Thanks. I added Scot Free to my library list today!

Don't you like Catriona's reasoning with vowels, Jeff, for the pronunciation? I have a friend in Edinburgh. Maybe next May or September.

Gram, You couldn't have written anything that would start my day off any better. Thank you!

Thank you so very much for having me, Lesa. And for the great questions. Reading this has started off publication day with a smile on my face. (As my poor little book goes out into the cold hard world all alone . . .) Cx

Awww. Bought Scot & Soda for the library here, 4 copies on order, and it appears on OverDrive today as "New in ebooks, which I bought, too. Librarians will always have your back. https://evpl.overdrive.com/

Thank you, Cat, for a fun interview!