At Home in the Dark edited by Lawrence Block 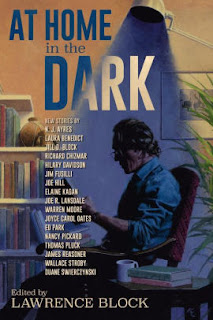 While Akashic Books calls their story collections "noir", Lawrence Block, editor of At Home in the Dark, says he prefers the term "dark". This anthology has an outstanding lineup of authors including Hilary Davidson, Joe Hill, Joe R. Lansdale, Duane Swierczynski. However, quality varies in the seventeen pieces. With seventeen stories, most readers will hesitate before paying $50 for this collection.

While most of the pieces can make the reader uncomfortable, four stories stood out to me, lingering in memory. My reaction to Joe R. Lansdale's dystopian one was "Wow!" "The Senior Girls Bayonet Drill Team" is told by a high school senior, a girl who has managed to survive all the way through school. It's creepy because it sounds like any team on the way to a "game" in a stadium, but these girls end up scarred for life, or dead as they fight with bayonets against other girls' teams.

Nancy Pickard's "If Only You Would Leave Me" tells of a seemingly perfect couple who can't stand being married any longer. Both partners get to complain before the surprise ending.

"Giant's Despair" by Duane Swierczynski tells of a man who has difficulty using his hands, but finds a way to deal with trouble when his grandchildren's father shows up at the house in the middle of the night.

Then, there's Joe Hill's horror story, "Faun". I can't even give hints about this one without spoiling it. However, there are multiple comments about Ray Bradbury's "A Sound of Thunder", if you remember that story.

Those are the four stories that stand out to me. I'm sure other readers would have a different reaction, and appreciate other pieces. However, it's up to you and your local library to decide if this anthology, At Home in the Dark, is worth $50.

Lesa, thanks again for the Advanced Proof of this one. It is coming up shortly in my short story rotation. It prompted me to get Block's previous collection, which I missed, called DARK CITY LIGHTS: New York Stories (2015). I have to agree with you about the $50 price. One wonders what they were thinking.

I know, Sandy. I liked some much better than others.

There you go, Jeff. At least it prompted you to pick up an earlier book. And, you're welcome.

It is available through the library, but not sure if I'm even going to try it,,,so many other books on my list.

I'd go with the other books on your list, Gram.