The Overnight Kidnapper by Andrea Camilleri 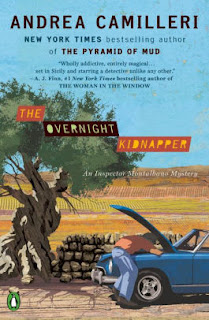 Whether it's the actual writing or the translation by Stephen Sartarelli, the twenty-third book in the Inspector Montalbano mystery series, The Overnight Kidnapper, has enough humor involving the office staff at the police department to make it a Sicilian cousin of Bill Crider's Sheriff Dan Rhodes' mysteries. Armchair travelers may want to venture to Sicily for the latest book. You don't need to have read earlier books to enjoy the humor in this one.


The opening scenes are already funny. One involves a fly waking Inspector Salvo Montalbano. The other scene causes him to be late for work. He attempts to break up a fight, and all three men, including Montalbano, are arrested by the Carabinieri. Once he's at work, he learns of the strange kidnapping of a woman. She was abducted, drugged, and released unharmed the next morning. When that happens a second time, with another woman, it doesn't take much for Montalbano to catch the similarities. Both kidnap victims are in their thirties and work at banks. When a third kidnapping turns violent, bankers start to worry.

Police don't work in a vacuum, with just one case at a time. Montalbano and his team are also investigating a case of arson. The owner of the burnt out shop, Marcello Di Carlo, has disappeared. Montalbano is shrewd enough to find a connection between Di Carlo's disappearance and the unusual kidnappings.

The Overnight Kidnapper is an atmospheric mystery. It's filled with descriptions of Sicilian politics, customs, and food. Readers will appreciate Inspector Montalbano's team and his sly ability to maneuver his superiors. If you're looking for a humorous police procedural series, check out Andrea Camilleri's books.

I have several of this series on my shelf, but not the time to read them in order.

I'd never read any of the others, Shelleyrae. This one worked for me, even though I hadn't. Give one of yours a try.

Love them! I picked up book one and have bought each new one as it has been translated. Salvo is one of my favorites now, and I love his frequent asides for descriptions of what he is eating. The side characters are fun too, with their own little quirks, and overall this is a series I read as soon as they come out (though this one is waiting for me to finish a few library books first, sort of a dessert waiting until the veggies are done!).

The first I'd read, Jeff. I enjoyed the humor. This one translated well.

It did. He has the same translator for all of his books.

Also, Camilleri is now 93 and still publishing one of these a year.

I'll look for them!