Murder at the Palace by Margaret Dumas 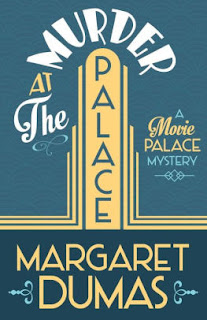 If you enjoy Jeff Cohen's mysteries involving films, or his ones with ghosts, and the humor in those books, you might want to try Margaret Dumas' first Movie Palace mystery, Murder at the Palace. Along with the mystery, there are summaries and reviews of classic films from a blog called "Movies My Friends Should Watch" by  "Sally Lee". Those reviews just add to the enjoyment of this book.

Nora Paige was lucky she had a friend who was a shareholder in a classic movie theater in San Francisco. When Nora's actor husband had a love affair with his co-star, Nora was able to leave town, and take over the management of the theater. The staff isn't trusting. The theater might not have been doing well, but they'd all been together for years when the manager died. And, Nora has an unusual depth of knowledge about classic films, but the staff doesn't know it. They've been bumbling along together, but, when the ice machine is causing problems, Nora goes to get ice. Instead of ice, she finds a dead stranger in the ice machine.

Nora has an unusual situation on her hands, and it's not just the murdered body. She has a dedicated group of misfits who have to learn to work with her. And, she has stories of two ghosts who are supposed to haunt the theater. She doesn't believe in ghosts. One story is about a showgirl who died during a knife-throwing act when the theater was part of Vaudeville. The other legend is about an usherette who was thrown off the balcony in the thirties. That's Trixie, the ghost who appears only to Nora. And, Nora may need Trixie's help if she's to prevent another murder.

Murder at the Palace has great characters, including Trixie. It's a delightful book, and as I said, the movie summaries just add to the appeal. Who wouldn't want to read about Blithe Spirit (1945), Random Harvest (1942), Double Indemnity (1944)? It's no accident that particular books are picked for this mystery. If I had greater knowledge of classic films, I'm sure the connections to the plot would be even more obvious. Take a break, and step into the world of classic films and theater with Murder at the Palace.

ARRGHH . . . Margaret Dumas was at our Sisters in Crime meeting on Saturday and left her own book on the book exchange table--I missed it! Maybe I'll have better luck next time. This book sounds like fun.

It is fun, Margie. If I knew more about classic films, it would have been even better. I really enjoyed the comments about the films. Darn. I'm sorry you missed the book! Maybe she'll bring one the next time!

I too enjoyed this book and am looking forward to the next one.