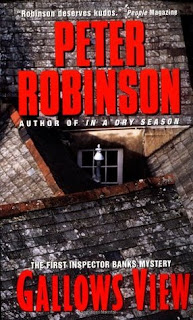 I thought I'd never read one of Peter Robinson's Alan Banks police procedurals when I picked up Gallows View. However, I quickly had that vague feeling of familiarity when I started the book. Even so, I reread the first in the series because I wanted the introduction to characters before I continued. I'm one of those readers who, even when told the series gets better, wants to start at the beginning.

Detective Chief Inspector Alan Banks has moved from London to Eastvale in Yorkshire, expecting a quieter job.However, the local police are coping with a peeping Tom, some break-ins that occur at the home of older women who live alone, and, eventually, a murder. Those are just the cases Banks' small team is handling. And, a women's group seems to think the police are not putting enough emphasis on the peeping Tom case, so Superintendent Gristhorpe brings in a consultant. Dr. Jenny Fuller is a professor and a psychologist, and Gristhorpe hopes she can profile the perpetrator.

The best police procedurals, in my opinion, mix the professional lives of the officers, their investigations and cases, with their personal lives. It's easy to see in this debut novel that Robinson will successfully meld those aspects of Banks' life. Banks' wife, Sandra, has an interest in photography, and her time with the local camera club is an important aspect of the story. And, as much as Alan loves his wife, he admits his attraction and interest in Jenny Fuller. Those characters, and their background, come together in a time of crisis, one in which Banks has to make a crucial decision.

Gallows View was nominated for several awards after its original release in 1987. Robinson skillfully handles the police investigation and interrogations. It's always interesting to follow along with the police as they check suspects and examine stories. However, the style in which Robinson introduces his characters, and blends their personal stories will draw readers back. In fact, the author's writing style, stories, and characters, particularly Alan Banks, have drawn readers for another twenty-four police procedurals so far.

I have read one book in this series - IN A DRY SEASON. That one is further down the chain of books. I keep meaning to begin this series and I'm glad to hear of your experience with GALLOWS VIEW. It's a long series, but I like long series. Have you watched any of the TV adaptations? We've only seen one episode or maybe two. It was OK, but I can't remember how the actors compare with the books.

Kay, I like Stephen Tompkinson as an actor as a rule, but he was madly miscast (IMHO) as Banks, and the adaptations went wildly away from the books.

I was reading a lot of British police stuff at the time (Reginald Hill, etc) and Robinson was a perfect fit for me. I read several of the early ones over a relatively short period to catch up - like Lesa I need to start at the beginning of an ongoing series - and have kept pretty much up to date since. (I am waiting for the library to provide me with the new one.)

I haven't seen the TV adaptations. I don't watch too many series on TV, or I tire of them. But, like Jeff, I'm up for a long-running book series. I really like British police stuff. I read Reginald Hall. Loved Dorothy Simpson's Luke Thanet series, probably my all-time favorite British series. Just not fair what happened, that she quit writing because of her hands. Wonderful series!

I am not aware of the TV show that has been mentioned this morning. Would someone please tell me the name of the show.
Thank you.

DCI Banks, Charlotte. It was on PBS here.

I was surprised how much I liked the Dorothy Simpson series too, Lesa. I don't know what I expected, but it surpassed it. I read them one after the other. I never knew why she stopped writing. I like the Cynthia Harrod-Eagles/Bill Slider series now, but don't read them with the same intensity, just read one a year or so.

I haven't read more than one of the books, but I did enjoy the Inspector George Gently TV series. Martin Shaw did a very good job with the role. The show was set in the 1960s.

A couple times when I commented on DorothyL, Jeff, I was told she had to stop writing because of the pain in her hands. I have no idea if it was arthritis, carpal tunnel, or something else. But, that's what I was told.

Jeff, thank you for letting me know. I did watch all of those shows on Acorn through Amazon Prime Video. Of course I pay $4.99 a month for Acorn, which is above my Amazon Prime.

I was pleased about your report about your shoulder on Thursday. Like updates.

Definitely one of my favorites. Reading CARELESS LOVE right now.

I just received the second in the series, Patti. I do have Careless Love, but it will be a while before I get to that.