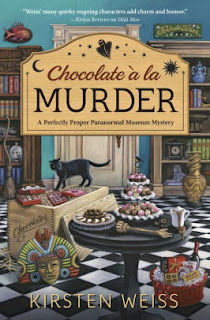 When I reviewed Kirsten Weiss' Deja Moo (http://bit.ly/2FB8kQe), I mentioned the interesting characters and setting. Maddie Kosloski, owner of the paranormal museum in San Benedetto, California is back in Weiss' Chocolate a la Murder, but, this time, her mother isn't quite as eager to participate in the investigation. Instead, she worries about Maddie and her involvement in the latest murder in town.

Maddie's latest exhibit at the museum ties in with the town's Wine and Chocolate Days. However, the chocolates ordered from Reine Chocolates have't arrived, so Maddie offers to pick them up for her business and her friend's tea room. Yet, she can't find anyone at the chocolate factory, except for a lone picketer. As she hunts through the factory, she loses her taste for chocolate. Finding a man's body, covered in chocolate might cause that. The 911 operator asks her to do CPR, which only makes it a stickier mess when the police arrive.

Maddie might be dating a police detective, but, after finding the body, she can't forget the scene. She asks so many questions that someone tries to run her over. She also believes she's being followed. Despite warnings from her worried mother, the police, and even signs from her cat, Maddie's convinced that since she found the body, she's supposed to be involved in solving the murder.

Weiss' follow-up to Deja Moo blends a strong sense of place with paranormal elements. You don't have to have read any of the previous books to enjoy Maddie Kosloski, her paranormal museum, and the small town of San Benedetto. Chocolate a la Murder is a treat for the cozy mystery reader.

FTC Full Disclosure - I received the book to review for a journal.

Thanks, Lesa. I enjoyed Deja Moo and didn't know about this one.


Just checked and the first book in the series is THE PERFECTLY PROPER PARANORMAL MUSEUM.

Chocolate a la Murder is the fourth in the series.

Thanks for making my TBR pile grow even higher and higher.

I thought Deja Moo was fun, too, Margie.

I don't know how to take that Netteanne, so I'll take it as a compliment. You're welcome!