Who Killed the Fonz? by James Boice 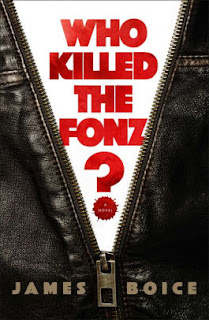 Arthur Fonzarelli, the Fonz, always seemed invincible on "Happy Days". The show celebrated the 1950s, with stories of family life and the friendship between Fonzie and Richie Cunningham, and Fonzie's love of the Cunningham family. Now, James Boice tries to recapture the nostalgia while writing what could have happened in the future, the 1980s, in Who Killed the Fonz?

Richard Cunningham married Lori Beth, returned from the service, and then packed up his small family and moved to Hollywood with dreams of being a screenwriter. He was afraid to follow those dreams, until Fonzie pushed him. Now, twenty-some years later, Richard has had one cult film, and an Oscar nomination. But, after falling for Cormac McCarthy's Suttree, he's worked on that screenplay for several years, with little hope of success. His agent offers him one last chance. He can write a screenplay for a prince's project, "Space Battles". It's a depressed Richard who returns home, only to have his mother and Lori Beth break the news to him. The Fonz was killed, flying over the guardrail of a bridge, into Lake Michigan, after he lost control of his bike.

When he returns to Milwaukee for the funeral, it's a step into his past, when he was Richie Cunningham, and hung out at Arnold's with Ralph and Potsy. But, Arnold's is losing out to the restaurant across the street, and the mill workers, like Ralph and Potsy, are the only ones who still come there. And, Richie's friends sneer and call him "Richard", a man who went Hollywood and is too good for them. One aspect of life hasn't changed. All kinds of women show up to remember Fonz at his funeral.

Richie finds several reasons to linger in town. A candidate for governor seems to understand Richie's fears of failure, and offers him the chance to write and produce a commercial. Then, there's that bike rider who shows up several times, a rider on a motorcycle that resembles Fonzie's. And, someone is leaving hints that the Fonz may not have had an accident. He might have been murdered.

While, Boice's Who Killed the Fonz? isn't as dark as the cover copy suggests, it does succeed with the nostalgia. If you were a fan of "Happy Days", it's a little bittersweet to picture the cast in their mid-forties, and older. It's easy to picture Mrs. Cunningham when she says, "Richard, sit down." There are stories about Fonzie, fond memories of the past, even the time he "jumped the shark".

It's odd to take a trip back to a show that was set in the 1950s, and see the characters now in the early 80s. Although it may feel like a series reboot, it's also an examination of a man's feelings as he looks back at life, feeling nostalgic, and wondering about his choices. Despite the lack of mystery, Who Killed the Fonz? is an entertaining story.

I have this on hold at the library

It's was fun to meet up with old TV favorites, Sandy.

I was surprised to read that his ability to jump the shark did not end his life.

I just put it on hold at the library and then suspended it as I discovered that I have 4 books in transit!

The book has a few surprises, Kevin.

I am already on the hold list at the library! Thought it looked intriguing.

I hope you enjoy it, Julie.