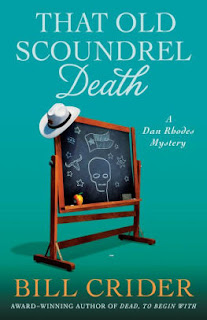 Bill Crider showed so much courage last year, sharing his cancer diagnosis on social media while he kept shocked readers and friends updated with the course of the disease that killed him. When you read the twenty-fifth and final Sheriff Dan Rhodes mystery, That Old Scoundrel Death, you'll observe that courage one more time. Crider ends the series with the wit and humanity that we've always seen in the books.

When Sheriff Rhodes finds himself facing down a man with a pistol, he knows he made a mistake. It's the first of several in the course of the story, mistakes that make him wonder if he should be thinking of retirement. This time, the sheriff is able to grab the gun, and successfully arrest the man who had turned on another motorist, complaining he cut him off. While the other man goes home to change clothes, his story and his name prove to be false. But, everyone has a role in Rhodes' stories. In this case, that anonymous man soon becomes a murder victim.

It seems there are problems in Thurston, Texas, one of the small communities in Blacklin County. The issues surround an old schoolhouse. Some want it torn down. Others want it kept to commemorate history. It's a fight between some of the wealthy families in the town. And, that schoolhouse becomes the site of a murder, even before Sheriff Rhodes has to run in and save a neighbor lady from a fire as the school building burns to the ground.

It's getting to be a little much for Sheriff Rhodes. He warns everyone he might not run for re-election. He has a murder and a fire on his hands, but he still has to deal with Seepy Benton, who is now a private detective, two buddies who are up to no good, the social media that wants to make Rhodes a hero. Then there are all the day-to-day crimes that occur while he's trying to handle a major investigation. Retirement looks better all the time. And, there are moments when Rhodes looks at the community, wondering if they really know what the sheriff's department does. Right until the end, Sheriff Dan Rhodes threatens to not run for re-election.

Sheriff Rhodes has been a model for so many lawmen in other books. "His methods were old-school ones. He simply kept on talking to people until things cleared up for him or until he caught somebody in a revealing lie." Samuel Craddock, Terry Shames' Texas sheriff, is cut in the same mold.  Even Mark de Castrique's undertaker who investigates, Buryin' Barry, spends his time talking to people. We're lucky to have small town sleuths in the spirit of Sheriff Dan Rhodes. But, the sheriff's wit and humanity will be missed, just as we all miss Bill Crider.

*****
FTC Full Disclosure - The author's daughter gave me a copy of the book.

Thanks for the great review. I've been saving this one, knowing that it was the last. Bill was a good friend over 40 years and sometimes it is still hard to come to terms with the fact that he's gone. I've read all of the Sheriff Rhodes books, of course, as well as all of his other mysteries. I do have a few pseudonymous westerns and horror novels on the shelf yet to read.

Thank you for the review and the reminder of what a wonderful writer Bill Crider was and how I always looked forward to his books. Sheriff Rhodes, as created by the author, was an interesting man who did his best to keep the county safe. The side characters were wonderful and I loved the dogs.

I hope I didn't give anything away that's a spoiler for you, Jeff. I don't like, nor want to do that. You're the one who introduced me to Bill Crider and Angela. I can't imagine how hard it must be for you after such a long friendship. I understand why you're saving it. You'll probably hear his voice in it so much more than the rest of us. I'm sorry for the loss, but I'm glad you had such an enduring friendship.

Netteanne, It's those quiet writers who never seem to get their due. But, as a kind person, I think Bill was appreciated. I hope he knew how much.

Bill Crider and Dan Rhodes will be missed.

What a pleasant surprise! I somehow missed this Dan Rhodes adventure, and within the next minute it will be in my Kindle library! Thanks, Lesa!

You're so right, Glen. They'll both be missed, and they'll last.

I knew Bill for several years, from fanzines, the apa DAPA - EM, and at conventions and room parties. His Rhodes books are wonderful, and I bought this one on publication day, but am "saving" it to read as it’s the last. Lovely review, thank you.