The Ice Maiden by Sara Sheridan 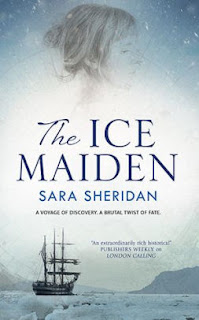 Sara Sheridan departs from her Mirabelle Bevins mysteries with The Ice Maiden, called "A historical
adventure with a paranormal twist". Are you ready for that historical adventure in Antarctica in the 19th century?

In 1842, Karina, a widow, is stranded on Deception Island, an island located in the South Shetland Islands above Antarctica. Her husband disappeared while on a whaling ship. She's desperate to reach home, and stows away on a ship, hoping to eventually reach Amsterdam. She hides, but, when discovered, identifies herself as a young man named Karl. To her horror, she learns she's not on the way to Europe, but on the way to Antarctica on Captain James Ross' trip to map the continent.

When the crew learns "Karl" can cook, she's quite happy working as the cook's assistant. Then, an accident reveals her true identity. Although many of the crew view a woman on board as bad luck, Karina starts a relationship with the ship's doctor, Joseph Hooker, and she's content. Then, on the day some of the crew are to plant the flag, Karina falls in a crevasse. She's left behind as dead.

The paranormal twist comes from Karina's experiences after her death. She wants revenge on the men who left her there. Her spirit lingers over Antarctica. It's there she observes the expeditions led by Captains Scott and Shackleton.

The Ice Maiden is an unusual story. While the first half feels as if it's a woman's story of a desperate escape, the second seems to be a history of Antarctic exploration, as observed by a ghost. I did find myself researching the various Antarctic explorations and the men involved. Not quite what I expected when I received the book to review as a mystery.

I had written a similar Women's Fiction novel and used usabookreviewers.com to help me with reviews and ebook promotion. Surely recommended for Indie authors though a bit pricey..