Have You Heard...We'll Always Have Parrots by Donna Andrews

Thank you, again, to Sandie Herron, for reviewing audio books for the "Have You Heard?" feature. I always appreciate it when Sandie can step in when I've been busy and don't have a book to review. Thank you, Sandie. 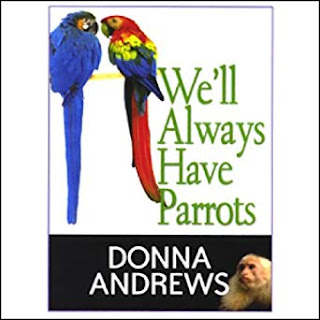 Meg Langslow, blacksmith, has accompanied her fiancé Michael, drama professor, to a convention run by Friends of Amblyopia, fans of the cult TV show "Porfiria, Queen of the Jungle."  Michael plays the part of Mephisto, a Machiavellian sorcerer, on the show.  His presence at the convention is required by his contract and by Tamerlaine Wynncliffe-Jones, the aging woman who plays Queen Porfiria and owns the production company.
Trouble is brewing right from the start when room service delivers parrots, freed by monkeys from the jungle-like lobby display, along with breakfast trays.  The health department insists they remove the live animals yet somehow each time they are captured, they are set free again.

Meg is attending the convention to be with Michael; however, she also has a booth where her swords are for sale which she shares with Alaric Steele.  She’s honored when the show’s blade master, in charge of teaching the cast fencing and stage fighting, asks for her help in a demonstration.  Wandering the convention as though lost is Ichabod Dilley.  Ichabod Dilley was the artist of the original comic strip that inspired the TV show, but this Ichabod Dilley is not an artist but a motivational speaker.  Meg takes him under her wing to escort him to his panel at the convention.

It takes much coaxing to get Porfiria, or the "QB" (Queen Bee) to open her hotel room door, where it is obvious she’s been drinking.  She is due on stage and to sign autographs afterwards.  No one really likes Porfiria, and she keeps employees and cast members for only short lengths of time.

Later on, as the charity auction is winding down, there’s no Porfiria there to judge the look-alike contest.  Meg trudges up to her room where the door has been opened a crack by security, but only as far as the chain will allow.  Meg goes into her room next door and climbs over the balcony to enter the QB’s room.  What she finds inside is a grey parrot shrieking "Leave me alone" each time someone knocks on the door and a dead body next to the bed.  Queen Porfiria has been bludgeoned with a wine bottle.

Writer Donna Andrews has hit her witty stride in this fifth installment of the Meg Langslow series.  Andrews has a way of finding the hilarity in a situation and then exploiting it to make it even more entertaining.  As always, Meg’s dad fancies himself a solver of mysteries and has his travel medical bag along just in case.  Salome, the tiger, another of the jungle animals on display, has been saved from a life of misery.  The fans are getting the ever-present police to autograph their programs along with the stars.  All sorts of commotion ensues with almost no one feeling any remorse that Porfiria is dead, unless you count all the people who may now have to find new jobs with the continuity of the series in question.

WE’LL ALWAYS HAVE PARROTS could have gone over the top in someone else’s hands, but Donna Andrews has a good grip on the wild situations.  This audiobook features narrator Bernadette Dunne who does a great job bringing us the hilarity but keeping a “straight face” in doing so. She was able to punctuate her reading without the reader knowing it which made it clear when dialogue was being spoken and also kept the narration flowing.

Ultimately Meg must defend her life against a killer, which nets her far more than she ever imagined.  I can’t wait to find out how it all comes together in the next tale.
Posted by Lesa at 3:00 AM

Donna Andrews has become my go to author if I need a mystery with a laugh! I just adore them!

I'm so glad you've found such an author, Deb.

As always, I’m glad to help!

CONTACT DR PERFECT TODAY VIA EMAIL solutiontoallproblems1@gmail.com AND GET YOUR BROKEN MARRIAGE RESTORED BACK WITHIN 24 HOURS

Hello everyone am Lucas Martinez from USA, after 15 years of marriage, me and my wife were living happily together we loved each other so much and I Loved my family they were my top priority, until one morning me and my wife had a little argument which I know every couples do have because there are no perfect couples in this world after the argument I went to work when I came home I couldn't find my wife and our kids she also packed her bags and that of the kids and left I tried calling her but I couldn't reach her I went to her friend's house but they couldn't tell me where to find her, I was frustrated I didn't know what to do I started drinking alcohol every day and night I stopped going to work it was a difficult thing for me because she and my kids means everything to me it's was like part of my body left me I couldn't function well, one day I was browsing on the Internet when I saw a testimony of someone testifying of a man called Dr Perfect and how he brought back his wife within 24 hours I didn't think twice about it I messaged him and told him everything that happened between me and my wife and he said he find my problem very easy for him to solve he also told me to trust him that my wife will come back and I told him I trust him and he asked for some information which I gave him, 24 hours later my wife came back home with the kids I was so surprised to see her it was like a dream to me she started crying and apologizing to me I told her it's okay I forgive her that am happy she is back we are now living happily together. If you are heart broken because your wife or husband left you email this powerful love spell caster called Dr Perfect via email