Have You Heard?...Charlaine Harris' All Together Dead

While I'm frantically reading for journal reviews before the holidays, Sandie Herron has stepped up with some audio book reviews. Thank you, Sandie! 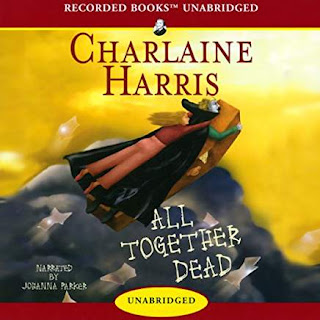 Wedding fever has hit Bon Temps, Louisiana, and Jason Stackhouse finally gets hitched when were-panther Crystal Norris discovers she is pregnant again.  Jason asks his sister Sookie to attend.  Quinn the were-tiger, accompanies Sookie, enhancing her status.  This wedding is unique since Sookie must vouch for Jason as his closest living relative and agree to take the penalty if Jason does wrong.

Telepath Sookie Stackhouse is dating one of the last were-tigers. She knows there is more about Quinn that she needs to learn; what makes him the legend about which other shapeshifters whisper?  Sookie is also hosting witch Amelia who fled New Orleans after transforming her boyfriend Bob into a cat, since she would owe a penalty to the witch community.  However, Amelia needs help finding the spell to turn the cat back into her boyfriend, but since she cannot risk contact, Bob’s fate is uncertain.

Sookie must leave Amelia in Louisiana to attend the vampire summit in Rhodes.  Louisiana vampire Queen Sophie-Anne has requested that Sookie accompany her and read the minds of any humans she deals with to detect deceit or malice.  The Queen’s power has declined following hurricane Katrina and so has her wealth.  While the Queen and other vampires fled New Orleans, they have yet to return.  Even the human population has offered assistance, since it will bring tourism back to the city.  Queen Sophie-Anne will seek support in the rebuilding efforts while at the summit.

Several months ago at a reception celebrating the nuptials of the Queen of Louisiana and the King of Arkansas, betrayals and hidden agendas bring about an attempt on the Queen’s life and the murder of the King.  In the Queen’s defense, her personal bodyguard killed the King, instigating a brawl among all vampires present.  At the summit, Queen Sophie-Anne will go on trial for murder if she cannot negotiate a settlement.

The summit is all about power struggles within kingdoms and among rivals, between vampires and humans.  Even Sookie becomes embroiled, so when the Queen’s bodyguard demands that her loyalty be fortified, Sookie and Eric must exchange blood, hence becoming blood bonded. When Sookie encounters Texan Barry Bellboy, the only other telepath she knows, they compare experiences and realize that each person has their own tolerance for what they can live with and what they consider to be way outside the lines.  This inner turmoil helps to define each of them.

The summit is full of mysterious goings on.  Guards from another dimension protect the King of Kentucky, but no one can discern why.  Sookie discovers a bomb outside the Queen’s suite, but who placed it there?  What do the extra suitcases and caskets hold, since no one claims them?  Rumors fly about the Church of the Sun.

This seventh entry into the unique world of Sookie Stackhouse brings many magical creatures together at increasingly complex and dangerous events.  Very entertaining and definitely recommended.
Posted by Lesa at 3:00 AM

CONTACT DR PERFECT TODAY VIA EMAIL solutiontoallproblems1@gmail.com AND GET YOUR BROKEN MARRIAGE RESTORED BACK WITHIN 24 HOURS

Hello everyone am Lucas Martinez from USA, after 15 years of marriage, me and my wife were living happily together we loved each other so much and I Loved my family they were my top priority, until one morning me and my wife had a little argument which I know every couples do have because there are no perfect couples in this world after the argument I went to work when I came home I couldn't find my wife and our kids she also packed her bags and that of the kids and left I tried calling her but I couldn't reach her I went to her friend's house but they couldn't tell me where to find her, I was frustrated I didn't know what to do I started drinking alcohol every day and night I stopped going to work it was a difficult thing for me because she and my kids means everything to me it's was like part of my body left me I couldn't function well, one day I was browsing on the Internet when I saw a testimony of someone testifying of a man called Dr Perfect and how he brought back his wife within 24 hours I didn't think twice about it I messaged him and told him everything that happened between me and my wife and he said he find my problem very easy for him to solve he also told me to trust him that my wife will come back and I told him I trust him and he asked for some information which I gave him, 24 hours later my wife came back home with the kids I was so surprised to see her it was like a dream to me she started crying and apologizing to me I told her it's okay I forgive her that am happy she is back we are now living happily together. If you are heart broken because your wife or husband left you email this powerful love spell caster called Dr Perfect via email