A Spell of Murder by Clea Simon 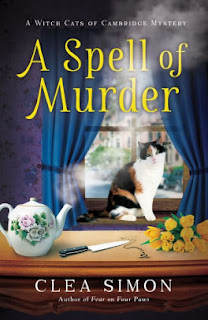 Clea Simon launches a new cozy series that will appeal to cat lovers with A Spell of Murder. It's the first Witch Cats of Cambridge mystery.

Becca's cats mean well, but when Harriet, the oldest of three cats with magical powers, conjures a pillow, Becca now believes she's a witch who can cast spells. Clara, the youngest cat, is right to fear that that pillow will create problems. Becca wants to believe she has magical powers, and that's what she tells her coven.

Becca was laid off from her job as a researcher. She lacks self-esteem, and needs money. Now that it appears she can cast spells, Trent, the coven's only male, shows interest in Becca. And, some of the women in the group now want to confide in the young woman. Suzanne has a secret she wants to share. When Becca's the one who finds Suzanne's body, that draws the attention of the police. It's only after Suzanne's murder that Becca discovers her ex-boyfriend was seeing Suzanne. One more reason to suspect Becca.

Becca knows she's a suspect, and she sets out to clear her name, questioning people. Clara and her sisters use their powers to follow and protect their human.

While Becca is a weak character, easily influenced, the anthropomorphized cats are amusing. They argue, cast spells, and behave as if they truly were sisters. Simon specializes in mysteries that combine cats and the paranormal. Fans of Rita Mae Brown's Mrs. Murphy books or Sofie Kelly's Magical Cats mysteries might enjoy the talking, spell-casting cats in A Spell of Murder.

My library is getting this one so I’ll give it a try. If I don’t like it it won’t cost me anything

Thanks for reading, Lesa!

I'm all in favor of using the library, Sandy.