The Frame-Up by Meghan Scott Molin 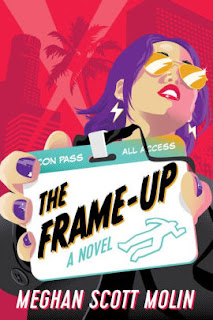 Welcome to the world of geek culture in Meghan Scott Molin's fun, fast-paced mystery, The Frame-Up. Even if you don't attend cons or read comic books, MG Martin's world is entertaining. It's repetitive to say it, but this is just a fun mystery.

MG (Michael-Grace) Martin is totally immersed in geek culture. Her parents disowned her when she dropped out of law school to write comic books. And, it's that knowledge of comics and their history that involves her in a criminal investigation. She's in a coffee shop when she sees a crime scene on a man's computer and says it looks like a crime scene from an old comic. She's right, and Detective Matteo Kildaire of the LAPD is interested both in her personally, and in her knowledge. And, once she talks with Matteo, she admits "Witty banter is my Kryptonite."

MG recognizes Matteo's crime scene as one starring her favorite superhero, the Hooded Falcon. She quickly becomes his consultant for the drug-related crimes where a golden arrow is left behind. But, MG keeps dangerous secrets from Matteo when her best friend, a drag queen, appears to be a suspect.

This fast-paced debut stars a kick-butt heroine and a cast of unconventional characters in a geek environment of comic books, superheroes and cons. MG's friends include other comic book artists, her gamer roommate, and a number of drag queens. While she's employed in the comic book world that she loves, costuming is her true passion, and the drag queens are willing models. The likable, sometimes awkward characters are well-developed in this humorous, engaging novel.

The Frame-Up is an original mystery. I can't wait for the second in the series. As I said, this one is just fun.

Kevin
(If I am a robot, I have a design complaint to file)

Ha! And, even then the stupid "bots" get through, Kevin.

You need comment moderation, Lesa. It cna be a hassle and does delay real comments, but it stops the bots and spammers.

I know, Kevin. It only seems to have hit again recently. I'm going to see what happens since I have been deleting it. If it gets worse, I'll have to do that. That makes it difficult on Thursdays when I'm at work.