Sandie's Corner - A Wrench in the Works by Kate Carlisle 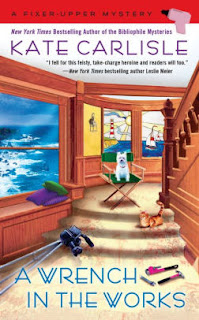 You're used to seeing Sandie Herron's name connected with the audio book reviews here under the topic, "Have You Heard?" Today, she has a review of Kate Carlisle's lastest book, A Wrench in the Works. (Thanks, Sandie!)

Contractor Shannon Hammer is happy to welcome her contractor sister Chloe back home.  It’s been ten years since she last lived in the family home in Lighthouse Cove.  She left after high school to find her way in Hollywood, and she became one of the stars of the Home Builder’s Network show “Makeover Madness.”  They want to film several episodes in Lighthouse Cove focusing on the Victorian architecture so prevalent in this historic town.  Chloe co-stars with Blake Bennett, an older man with whom she has a terrific stage presence.  They are complimented by a devoted crew headed by Sergio, a strong, handsome carpenter full of charm.

It isn’t until the entire crew arrives in town that Shannon meets the executive producer, Bree Bennett, wife of star Blake Bennett.  Bree keeps the show running, making most of the important decisions and carrying them out.  However, she has a nasty temper and is rude to most of her immediate staff as well as the stars and workers on the show.  Bree routinely fires them, never meaning for the firing to stick, until she fires her husband Blake.  The network has decided to start a new show without Blake and featuring Chloe and Sergio as soon as these segments are complete.

Chloe has recruited Shannon to be on the show while in town.  They arrive at the Bloom house, a rundown but appealing, well-designed Victorian home, early on the first day of shooting.  As they examine the house, they discover Bree’s dead body on the fireplace hearth.  Shannon calls the police chief, Eric Jensen, who promptly arrives and cancels any shooting within the home.  As Jensen processed the scene with his own crew, a search is made to find Blake Bennett.  He is discovered drugged in his trailer where he slept the night before.  Could he have killed Bree in his present state?  How many other disgruntled employees could have done the deed?

The next day Shannon discovers another dead body on the porch of the mansion.  The town’s rich kid, now an annoying adult, is actually the reason Chloe has stayed away so many years because of an incident in high school.  Later, while filming some outdoor shots, Chloe falls from an extension ladder rigged to fail.  Who would want Chloe dead?

This was a charming, very cozy mystery centering on Shannon and Chloe yet involving many other characters with distinct roles.  The plot advanced smoothly with several twists to follow.  The suspense ratchets up when Chloe becomes a target.  There is speculation on which the villain is, townspeople or TV crew, as everyone discusses events, yet this is not excessive.  The action keeps going without stalling on any one event or person.

A very delightful journey following our charismatic and compelling heroines in the sixth entry of the fixer-upper mystery series.  I hope to visit with them again soon.

Thanks so much for running this Lesa!