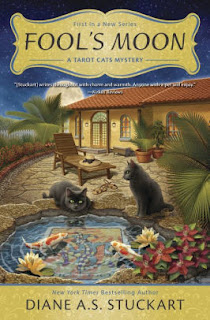 Sandie Herron and I both read Diane A.S. Stuckart's new mystery, the first in a series, Fool's Moon. It's not my type of book because I'm not fond of talking animals. However, Sandie had a much better reaction than I did. So, instead of sharing my review, I'm sharing Sandie's today.

FOOL’S MOON is the charming first entry in the Tarot Cats Mystery series.  The action starts immediately with two sibling black cats being thrown away in a box onto the streets.  While they’d been adopted as kittens by a wealthy, elderly woman and had enjoyed her mansion and grounds, she recently died. The two are split up right away with Ophelia being rescued by a white pit bull on her walk with Ruby Sparks, half sister to the owner of Botanica Santa Rosa, a New Age shop offering tarot card readings.  Brandon is taken in by a pawn shop owner nearby.  However the brother and sister do not know where the other has gone.

Zuki, the gentle pit bull, introduces Ophelia to her home and housemates which include a psychic koi who will answer but one question a day, in verse.  The animals talk to each other but not aloud in human language.  However, a suspension of disbelief is required to follow the animals communicating with each other.  Ophelia closely watches Ruby do tarot card readings and discovers a hidden talent for turning cards herself.

Zuki helps Ophelia find Brandon with clues from Philomena, the koi fish.  My own heart quickened during these journeys, and I cheered at their reunion.  They immediately put together the clues from their life at the Palm Beach mansion with what their former housekeeper Luciana had shared during her own tarot reading with Ruby. She suspects her former employer, Hilda, did not die an accidental death but was murdered. When Luciana dies under suspicious circumstances, Ruby gets involved because of what she had shared during their reading. Hilda’s family members also get involved as does the pawn shop owner Luis who claims Brandon is his cat.

Four special animals and two human beings all are looking into why the two women died.  The journey from mansion to new age shop was quite compelling, and the journey from shop back to the mansion is more gripping.  First the cats return with secret help separately from Zuki and Luis and Ruby, and then they return covertly with the same three, but this time all are searching for answers together.  What they find is a surprise to all but the koi, who knew all along.

Diane Stuckart, also the author of the Black Cat mystery series written under the name of Ali Brandon, has penned a delightful and enchanting adventure.  The reader learns a bit about tarot card reading while getting to know the cats and pit bull.  When not just one but two suspected murders take place, the animals deploy their skills and get their humans involved.  All together they solve both mysteries in a surprising and satisfying finale.  I highly enjoyed this heartwarming story and hope for many more entries in the Tarot Cats Mystery series.

I have this on hold at the library in print

I hope you enjoy it, Sandy.

Of course, Diane. You're welcome.

You know, you could do what Barry and I have done when we both have read the same book--run it as a double feature review. Put hers on top as your guest and then yours underneath it with a sperate intro. Those deals are super popular on my blog. It just is hard to time it out right for us as we both read very different things.

Great idea, Kevin! As you said, Sandie & I usually aren't reading the same titles, but if we do that again, I'll remember this. Great idea! Thank you.