Murder in the Dark by Simon R. Green 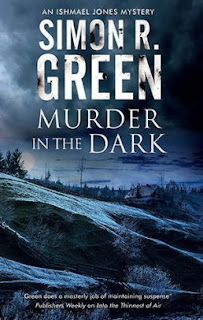 If you haven't yet discovered Simon R. Green's Ishmael Jones mysteries, Murder in the Dark is a good place to start. It's not quite as graphically violent as some of the earlier ones in the series. In fact, this one is reminiscent of Agatha Christie's And Then There Were None with the addition of Green's trademark black humor.

In 1963, Ishmael Jones crashed to Earth in an alien space ship. Now, he lives in England in human form and works as a field agent for the mysterious Organization, investigating weird and unusual cases. There are more than you would expect in an ancient country with a history packed with "monsters and mysteries". The latest mystery involves a mysterious hole in the side of Brassknockers Hill near Bath. Ishmael and his partner, Penny Belcourt, are dispatched with an urgent assignment to protect the scientists now working at the site. An archaeologist working at a dig fell into the hole and disappeared.

Ishmael and Penny find an odd group of scientists who have been coerced into their latest work with a promise of grant funding. But, as usual with one of Ishmael's assignments, it goes wrong very early. When one scientist who is eager to investigate the hole jumps into it, it's one more sign that people can be stupid in slasher films and genre-blended novels. Ishmael admits, "It's always the ones who go off on their own who end up getting killed." In book after book, Ishmael warns people to stick together, but like all the others, the scientists don't listen, and they're picked off by the hole, one by one. Jones is getting a little frustrated.

Ishmael's dry humor and his recognition that he has a hard time understanding human emotions is part of the appeal of this series. In this case, as the scientists die and Jones' extraordinary senses seem affected by some power in that black hole, he says, "I'm getting really tired of watching good people die on my watch because I couldn't solve the mystery fast enough."

Looking for a blend of science fiction, horror and mystery, with a dash of humor? That's Simon R. Green's latest Ishmael Jones adventure, Murder in the Dark.