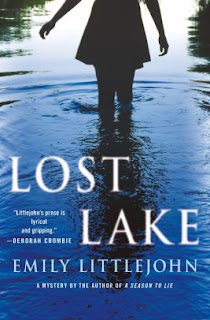 We should count the number of times I've said start at the beginning of a series. You don't have to with Emily Littlejohn's Gemma Monroe series, but that doesn't mean I really like starting with the third book. Lost Lake, set in a small town in Colorado, is an atmospheric mystery. Those who appreciate mysteries that emphasize the natural setting will enjoy this one.

Gemma Monroe is a police detective who responds to a call about a missing person. Four people had been camping at Lost Lake, and when they get up in the morning, one woman is missing. Gemma doesn't know if the it's the story the three friends are telling that makes her uneasy, or Lost Lake itself. There are stories about the lake, and young women who committed suicide there. Now, Gemma wonders about the missing woman, Sari Chesney.

When Sari's boss at the local history museum is killed soon after she reports the theft of a historic journal, Gemma's convinced there's a connection between the murder, the theft, and Sari's disappearance.

The investigations are made even more difficult by the mistrust within the police department itself. Someone is leaking information to the local newspaper, and the police chief asks Gemma to investigate. It's only been six months since the birth of Gemma's daughter. She's still dealing with a lack of sleep, and the discovery that her partner had an affair. The case load and Gemma's emotions make the investigations even more difficult.

Lost Lake is an intricately plotted police procedural with a strong emphasis on the atmosphere. If you're interested, I'd still suggest you start at the beginning of the series with Inherit the Bones.

I put Inherit the Bones on hold at the library. Not that I need any more books to read.

What is one more sample of a new author and her book series.
Starting with the first title.

I know, Sandy. But, you never know when you'll discover a series that speaks to you.

For whatever reason, I don't generally start a series with the first book. Sometimes, it makes a real difference, but not usually.

The library computer just screamed at me as I put the first book on hold....it does that a lot becuase I continue to abuse the heck out of it with hold requests.

I'm in the middle of reading the second in this series, Season to Lie, and absolutely love it. This third one is on hold at the library. And, yes, you can read it without starting the series, but I like to see the development of the characters over the series.

Glen, I agree with Tricia. It usually doesn't matter, but as she says, I like to watch the development of the characters.And, I know some authors say don't go back and read the first because the author developed as well. Usually, the author's first isn't my favorite either. But, I like to be there from the beginning.

Well, too bad if that computer doesn't like it when it's used as it should be, Kevin. Just too bad.

Oh, that's good to know, Tricia. And, check out my comment, just a couple above, to Glen.

Deborah Crombie wrote a terrific comment about the first in the series - Inherit the Bones - so I put it on my library list. I also learned that the author works in a library!!!