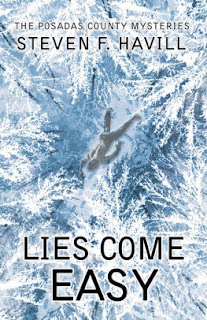 Crime takes no holiday. That's obvious in Steven F. Havill's twenty-third Posadas County mystery, Lies Come Easy. It's set at Christmas, but the small sheriff's department in the county has to cope with child endangerment, family issues, and murder.

As the story starts, Undersheriff Estelle Reyes-Guzman welcomes late night calls. One son, a world famous musician, is in Germany. One son is in college. And her physician husband is out of town at a conference. So, she responds when Deputy Tom Pasquale reports finding a two-year-old, Derry Fisher, walking along a snowy road. The boy's father dumped him out of his pickup and took off. Poor Derry won't have the best Christmas. His angry mother confronts his father at the hospital, and, while both parents are cuffed, it's Darrell Fisher who is arrested. The judge tears into him at his bail hearing, and his brother bails Darrell out. Fisher doesn't have long to celebrate. His wife's at work when Pasquale finds Darrell dead in his truck, shot. It may appear to be suicide, but Sheriff Robert Torrez suspects otherwise. And, the sheriff's suspicions are enough to disrupt the holidays for everyone in the department.

When her sons say they're flying home for a couple days, with a few surprises in store, Reyes-Guzman is desperate for some family time. But, investigations don't wait. There's a missing Forest Service tech, and a body is found at the home of his girlfriend, in the same small community of Regal where Darrell Fisher lived. Just as when Fisher's body was found, neighbors gather. A few of them have stories and guesses, just enough to confuse the investigation.

Lies Come Easy is a story of contrasts. The step-by-step police investigation follows the trail of dysfunctional family and community problems, lies, and murder. On the other hand, Undersheriff Reyes-Guzman is eager to celebrate Christmas with her family, a family gathering steeped in tradition and surprises and gifts of love shared with a growing family and her mentor, retired Sheriff Bill Gastner. At eighty-four, Gastner still has a few surprises in store for his Undersheriff.

Havill's latest is the twenty-third Posadas County mystery. The complex story brings together well-developed beloved characters, a police procedural, a Christmas setting, and a murder investigation. There's a little of everything for Havill's fans.

I've been reading these since the beginning and I'm always glad when the new one comes out.

Me, too, Jeff. I really enjoy this series.

It’s so funny that you reviewed this today. I have a copy coming tomorrow as a surprise early holiday gift for my Mom. I’ll have to wait to read it until after she does.

You won't be disappointed, Sandy.

Lesa, I am pleased to let you know my library has a lot of his books if I decide I am interested. You know that doesn’t happen a lot for me.
Thank you for the review. It was good as usual.
Hugs

Always in search of a new (to me) series...this fits the bill! Thanks. And Happy Thanksgiving!

I have never read this author before. But thanks to your review I just ordered the first title in the series on ABE. Thanks for the recommendation!

Charlotte! You're right. I know that doesn't happen often, so I'm happy you have a new series to try.

Thank you, Laurie! Happy Thanksgiving as well. I hope you enjoy the series as much as I do.

After hearing all of you I put Heartshot on my library list. Thanks. and Happy Turkey Day to all.

You're welcome, Gram. Happy Thanksgiving to you, too!