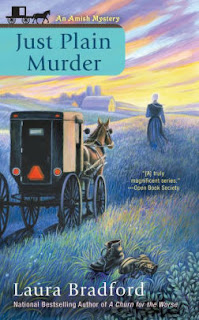 Whatever you do, don't enter Laura Bradford's Amish world in Pennsylvania expecting it to be the same as Linda Castillo's world in Ohio's Amish country. Just Plain Murder, the sixth in Bradford's Amish mystery series, is a cozy set in a community that usually resembles it's name, Heavenly. Then, there are the troubles that disrupt any community, murder.


Romantic moments between Claire Weatherly and Jakob Fisher are infrequent because of his job as a police detective. So, they steal the chance to have a picnic, but that peaceful time is one that Jakob comes to regret. He had ignored a phone call from the man who once mentored him, retired police chief Russ Granger. Granger is in town visiting his widowed daughter. Jakob knew he'd catch up with him later. But, he never had the chance because someone killed Russ outside his daughter's home.

Jakob beats himself up because he wasn't there for the man who watched over him, the man Jakob admired enough to follow into the police field, despite the loss of Fisher's Amish family. All of Claire's friends know it's important to be there for Jakob whle he struggles through the murder investigation. It's sometimes her thoughts that set him on the right track in the case.

Laura Bradford's cozy mystery succeeds in doing what cozies attempt to do. It shows how violence and murder can tear a community apart. Make no mistake about it. Bradford has built a community in Heavenly. The characters in this series become important to returning readers. We care about Claire and Jakob. And, like Claire, we want to see good things happen for her friends and family members. We can root for her aunt, Diane, to find a late-life romance. We're happy for the widower, Benjamin Miller, to have a chance at love. Each time Jakob's family members make a move to show their acceptance of him, we're happy for him. He understands why he's shunned for leaving after he was baptized. Readers, along with Claire, have a harder time watching family rejection of a good man.

Bradford has built her world in this atmospheric homespun series. Just Plain Murder is an intricately plotted, character-driven story that welcomes readers back. It's time to catch up with the beloved characters of Heavenly. As in all good cozy mysteries, we want good to triumph over evil, and justice for the victim. That's just right.

This is a series I keep going back to. I am so happy there is a new book. Thank you for the review.

Lesa, enjoyed your review. I haven’t ever read any of her books. I will check on this series and add it to my list of future books I would like to read.
Have a great day.
Hugs ~~

Me, too, Deb. I really like the characters in this series.

Thanks, Charlotte! I have to keep coming up with series so there might be a chance of you getting the books from your library system.

I'm thrilled you enjoyed your latest visit to Heavenly, PA! Thank you!!

Lesa, you hit a home run. My library has a lot of her books. When I am ready to start her series I will not have a problem. Thank you again. You are the best.

I read this last month and really enjoyed it. I hope she keeps writing this series for a long time.

Always, Laura! Thank you for taking us back.

I try, Charlotte! Thank you!

I agree, Sandy. I love the characters in this series.