Harvest of Secrets by Ellen Crosby 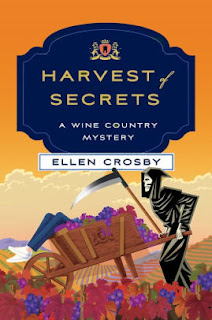 I have a confession to make. I actually sent my copy of Harvest of Secrets by Ellen Crosby to a friend who is a big fan. That means I don't have my copy in front of me to refer to. It feels as if the review is missing something when I don't have the book in hand.

Lucie Montgomery's workers at her Virginia vineyard may be right. It might be unlucky to find a skull. After a shed was destroyed during a storm, two of the men went to clear it. That's when they find a skull buried outside the family cemetery. They claim it's bad luck, and someone will die. Lucie discounts it, but then events start to snowball.

When the rest of the skeleton is found, the forensic anthropologist identifies it as a woman who was murdered. Lucie becomes emotionally involved as she tries to uncover the woman's story, knowing she must have been a relative. At the same time, her DNA results come back, revealing a living relative. Now, Lucie really has worries because she never told the family she had sent in for her DNA results, and she's concerned about family secrets.

Then, there's that skull. Lucie's workers had been worried. A neighboring winemaker stirs up trouble before he is killed. As a hurricane bears down on the region, Lucie's workers pressure her to find the actual killer. She has to investigate while keeping secrets she should share with loved ones.

The story was enjoyable, and I wish I had known more. It's a character-driven mystery with an introspective amateur sleuth who struggles with her past and her insecurities. Although I hadn't read any of the previous Wine Country mysteries, I didn't have a problem catching up with Lucie and the background of the stories. Even so, I still suggest other readers start at the beginning of the series.