Echoes of Evil by Heather Graham 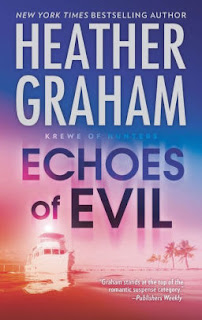 Brodie McFadden is actually on vacation in Key West, diving on the historical wreck of a British slave ship, when he finds a body. It's a recent corpse, though, not a body from two hundred years earlier. Because of an earlier connection, working a case with Liam Beckett of the Key West police force, Brodie is brought in to the case. He's also interested when a musician dies while performing at a bar. Is there a connection between the two dead men?

Dakota (Kody) McCoy isn't the one who discovers the link, but it's her Key West museum, the Haunts and History Museum, that links the two dead men. Cliff Bullard, the dead musician, is an old friend whose picture hangs in the museum, along with that of Kody's late father, a famous guitar player/songwriter. And, the dead man Brodie found on the shipwreck? He was about to donate family material from his slave-owning ancestors to the museum.

There are other links, but they're part of the plot, and I try not to reveal spoilers in my book reviews. Why do I continue to read the Krewe of Hunters books? For me, it's the combination of history, interesting locations, the paranormal, and the romance. I'm drawn, first, though, to the history elements. Graham does an excellent job ferreting out little known historical facts about the cities where her books are set. Those historical gems are fascinating, and I find they make the city more interesting. They may be background for some readers, but the background is foremost for me.

Graham's lead characters are always empathetic people who want to stop a killer, find justice for the dead, and restore order. I read mysteries because I want to see order restored when there's been an upheaval caused by evil and evil actions. The Krewe of Hunters series just happens to use dead souls, ghosts, as a weapon in the hunt for justice.

You can read any of the books in the Krewe of Hunters series, in any order. But, there is a small trilogy featuring the McFadden brothers, and it's helpful to read Fade to Black and Pale as Death before wrapping it up with Echoes of Evil.

One of my favorite authors.

I love this series, Gram.