Death and Daisies by Amanda Flower 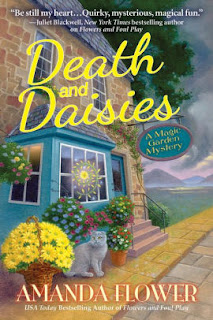 Before I frustrate blog readers by once again reviewing the second in a mystery series, I wanted to congratulate author Amanda Flower. Like other writer/librarians before her, such as Jenn McKinlay, Amanda is leaving her library job in Ohio to devote herself entirely to her writing career. Congratulations, Amanda. Flower is the author of a number of series. Death and Daisies is the second in her Magical Garden series set in Duncreigan, Scotland.

When Fiona Knox inherited her godfather's cottage and magic garden in Scotland in Flowers and Foul Play, she thought she'd be welcome in the village where his family, the MacAllisters, had lived for centuries. Instead, the village rector, Quaid MacCullen, refuses her admittance at the church door. He disapproves of the family and the magical garden. Then, on the eve of the opening of her new Climbing Rose Flower Shop, he threatens her.

Despite the rector, the opening of the flower shop is a success. At least it's successful until the volunteer village police chief announces he found the minister's murdered body. Although Chief Inspector Neil Craig never treats her as a suspect, Fiona feels accused. She knows some villagers suspect her because she had been a suspect in another murder investigation soon after she arrived in Scotland. After losing her flower shop in the U.S., Fiona is determined not to lose another shop to rumors and suspicion. She'll turn sleuth for a second time, if she must.

Flower's Death and Daisies has charming characters and an atmospheric setting. It has that setting in Scotland if you like the Scottish cozies by Paige Shelton or Molly MacRae. The characters remind me of Laura Bradford's in her Amish mysteries, characters who welcome readers back. And, of course there's the magical garden. In other words, fans of cozy mysteries might want to try Flowers and Foul Play or Death and Daisies.

Amanda writes the best series! I am so happy that she is at a point in her life where she can write full time. I am sure it was a hard decision.

I am aware of this author just never have read any of her books. Another sample to download and see if I will find another series to follow.

Lesa, in your future are you going to announce to us that you going to give up your job and start writing books?
You know we would be buying all your books.

I'm sure it was a hard decision, too, Deb. I'm glad she was able to do that as well, but I'm sure we lost another good librarian.

Thank you, Charlotte! No, I'm a reader like you, not a writer, so I don't see that I'm going to quit to write books. (smile) Thank you for your loyalty, though! Looks like your profile picture is changed. Success?

Lesa, profile picture finally changed today. Who can figure out tech things? Not me that is for sure.
I did try a few other things that didn’t work after I read your email, then gave up. Good way to start the day with this problem fixed.
Enjoying my ☕️ and reading later today.
Happy reading for your I trust.
Hugs......

I enjoyed the first book in this series and have an early review copy of this one coming. I also like her Amish candy shop series.

I enjoyed the first book in this series, but my favorites are Amanda Flower's Magical Bookshop mysteries and her Amish Candy Shop series.

Thanks, everyone. Sounds as if I have some reading to catch up with if several of you prefer other series by Amanda Flower. Looking forward to them!