Beyond Absolution by Cora Harrison 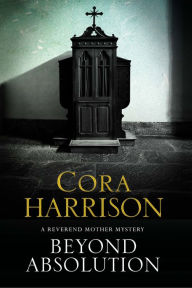 Cora Harrison's Reverend Mother mysteries, set in Cork, Ireland in the 1920s, are certainly realistic. She doesn't sugarcoat the conditions of life at that time, or the brutality and deaths during the period of rebellion. She doesn't hesitate to injure or kill characters that the reader has grown to care for, because that's life. It's one more reason to encourage readers to start with the first book in this series, A Shameful Murder. Once you've read the first couple books, the repercussions of a murder in the third book, Beyond Absolution, are all the more shocking.

When Reverend Mother Aquinas sees Father Dominic's body in the confessional at Holy Trinity Church, she knows he was murdered. She sends for the police doctor so he can confirm that the priest's death was not accidental. He was stabbed through the ear by someone on the other side of the confessional. The murder of a priest becomes the talk of Cork. Reverend Mother wants to find the killer, but she wants to know what Father Dominic did in the days leading up to his death that led someone to be so desperate as to need to kill a priest.

Why would a Capuchin Friar who took a vow of poverty spend time at a local antiques shop? Reverend Mother once again calls on her acquaintances and former students to help in her probe for answers. Dr. Scher is not only the police doctor; he regularly calls at the convent to treat the nuns. Reverend Mother's cousin, Lucy, is well-married and still connected to society. Inspector Patrick Cashman, a former student, can be advised and encouraged in his investigation. Another former student, Eileen MacSweeney, is a member of the Republican Party, and knows all of the people involved with the antiques store. Reverend Mother knows how to pull strings to get answers.

Reverend Mother Aquinas may be able to pull strings and solve murders, but she can't prevent accidents or murder. As I mentioned earlier, these books reflect a realistic view of the brutality of life in 1920s Cork with it's poverty, disease, and death. But, Reverend Mother's depth of knowledge and understanding, and the authenticity of these books, will draw readers who appreciate historical mysteries.

This series is definitely going on my list for 2019, Lesa. Your reviews really draw me in and I'm looking forward to beginning it (with the first book - ha!).

Yes, definitely with the first book, Kay. I wish this series & Kate Ellis' were better known. I actually just ordered the sixth Reverend Mother book through Book Depository. I have no idea when it will come out in the U.S. Probably in a year. But, I love the history, characters & setting in this one.