A Scandal in Scarlet by Vicki Delany 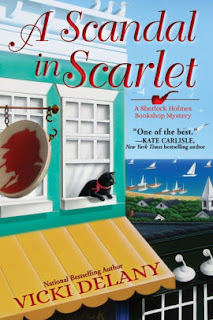 It's always a treat to catch up with Gemma Doyle, owner of the Sherlock Holmes Bookshop and Emporium. Vicki Delany has given us a delightful, idiosyncratic character whose brain resembles Holmes'. She lacks empathy and social skills, though, and just doesn't understand why people don't appreciate her matter-of-fact comments. She's doing a little bit better in the fourth in this charming series, A Scandal in Scarlet.

Gemma is walking her dog late one evening when they discover the Scarlet House, a local museum, is on fire. Because so much of it is destroyed by the fire, the museum needs to host a fundraiser. Gemma's friend Jayne Wilson, co-owner of Mrs. Hudson's Tearoom, offers to hold an auction there. Before the auction even starts, the chair of the Scarlet House board, Kathy Lamb, has an argument with one of the shop owners, Maureen Macgregor. When Gemma finds Kathy murdered int he backroom, all the witnesses point to Maureen.

Gemma and Maureen dislike each other, but that doesn't mean Gemma will allow Maureen to be wrongly accused. Kathy had her share of people who didn't like her, including her ex's new wife. But, even Gemma, with her uncanny ability to analyze people, comes up blank. There are too many suspects, although Gemma has her theories. However, a second murder throws Gemma off her game.

Although it's fun to laugh at Gemma, and entertaining to follow her thought processes, there are times the reader feels sympathy for her. She's knows she bungled her earlier romance with Police Detective Ryan Ashburton, just by being the all-knowing Gemma. But, she sums up a common problem in mysteries featuring amateur detectives. "The path of true love never runs smoothly, but never less than between an ambitious and very good police detective and a well-meaning but highly perceptive member of the law-abiding public."

Anyone who enjoys quirky amateur sleuths or Sherlock Holmes pastiches should try Delany's A Scandal in Scarlet. It's fun to read the entire series, but there's no reason you can't start with this one.

I tried the first book in this series but couldn’t get through it.

I love the characters, Sandy. But, I know it isn't for everyone.

Cathy talked about this one today too, Lesa. I've really got to start this series. I know I'd love it and I can't seem to talk Vicki into writing more Molly Smith books. LOL

I know, Kay. I love the Molly Smith books, too.