The Hollow of Fear by Sherry Thomas 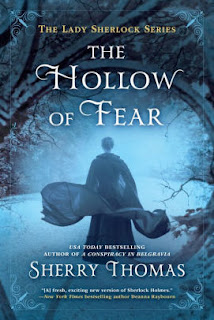 I've read the second, and now the third Lady Sherlock mystery by Sherry Thomas. I'm afraid I'm just not the right audience for these books, although I'm a big fan of the original Sherlock Holmes stories and some of the pastiches. I found The Hollow of Fear difficult to follow at times, and I'm not as in love with Charlotte Holmes as many readers are. As I said, though, I think I'm not the right audience.

When Charlotte Holmes helps her half-brother escape from men who are after him, she senses there is a plot in motion. Her sister, Livia, is an unwitting pawn. Livia annually visits Mrs. Newell, a distant relative. When the cisterns fail at Mrs. Newell's house, all her guests move to Lord Ingram's estate, Stern Hollow. Livia is aware that all society speculates about Charlotte's friendship with Lord Ingram, guessing that it's more than friendship. Then Livia, along with two of the worst gossips in London, find Lady Ingram's body in the estate's icehouse.

The Chief Inspector sent from Scotland Yard does everything in his power to prove Lord Ingram killed his wife. At the same time, Charlotte goes undercover as Sherlock Holmes' brother to discover the truth about the murder.

This third in the series picks up exactly where A Conspiracy in Belgravia ended. That may be confusing to readers who have not read the books. It's leisurely paced, with careful development of the elaborate storyline. While it's an atmospheric story, it's also a thought-provoking view of the expectations and roles of women in Victorian England.

Fans of the series, and readers of Doyle's canon, especially The Valley of Fear, will appreciate the intricately plotted mystery. Others may find it difficult to follow. I'm not a fan of slow-moving novels that take a while to unfold. As I said before, that's my problem, not an issue with The Hollow of Fear.

*****
FTC Full Disclosure - I received my book to review for a journal.

I like this series and am looking forward to reading this one. However, I know that not everyone is quite as much of a fan. Several of our book group members read the first book and some liked it - some did not. I love the time period probably more than any other for historical mysteries - give me London with fog and Jack the Ripper and I'm so there. Ha! Planning on listening to this book on audio. On to the next, right Lesa?

On to the next is right, Kay! And, on my lunch hour, I started one I'm already liking after 15 pages.