Pale as Death by Heather Graham 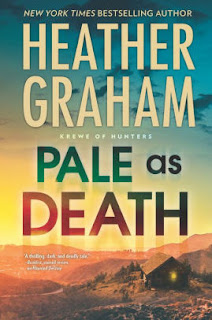 I can always count on Heather Graham's Krewe of Hunters books to allow me to escape. Pale as Death, with its connection to a mysterious historical murder, is a fascinating romantic suspense novel.

When Detective Sophie Manning and her partner Grant Vining respond to a crime scene in Hollywood, they know it will be an unusual one. Their team tends to handle the vicious and strange cases. But, this one, with a woman's body drained of blood, and dismembered, resembles one of the most famous unsolved murders in Hollywood, the Black Dahlia case. Elizabeth Short was brutally murdered and dismembered. Now, someone has killed a young actress who resembles Elizabeth Short, and the killing resembles the earlier death as well.

It's Sophie herself, though, that catches the attention of the McFadden family. She's the spokesperson for the case, and Bryan McFadden and his fiancé, Marnie, worked with Sophie when Marnie was threatened. Now, Bryan is preparing to attend training at Quantico for the Krewe of Hunters, so he can't offer help. Instead, they send Bruce, Bryan's brother and a private investigator who also sees ghosts. They all saw a ghost on the screen as Sophie addressed reporters, and they could tell she saw the ghost as well.

Sophie doesn't want to admit she's seeing the ghost of a journalist. The only other time she saw a ghost, her family put her into therapy. But, Bruce forces her to admit it when he claims he has a "gift". It will take time for her to trust him, but McFadden is determined to work with and protect the detective he's grown to admire.

It wouldn't be a romantic suspense novel without the romance between Sophie Manning and Bruce McFadden. However, even as a device in a novel, the mystery of the Black Dahlia case is the main attraction. While the current crime is solved by the end of the book, all of the questions and suppositions about the unsolved Black Dahlia case remain. Who killed Elizabeth Short?

Pale as Death, with its ghosts, romance, and connections to the past is another fascinating entry in Graham's Krewe of Hunters series.

I have never read one of the Krewe books but if memory serves you have reviewed them previously and highly recommend them. The first one in the series is available in my local library and I am going to give it a try.

I'll have to put this book on my TBR list. I've read many of Heather Graham's books, and she even signed one for me when I met her at a writer's conference. She's a really nice and funny lady. We had a great time on a panel together.

This author sounds so familiar! I'll bet I've read one by her and this means I should read this one :)

I hope you all at least try one of the Krewe of Hunter books. If you don't like them, move on to the next book. Or, you might like them as much as I do, and have 25 more books to read!

I have read all 26 Krewe books, plus The flynn Brothers trilogy and Harrison Investigations. I have also read many of her other series. Her books are always fun reads.

Aren't they, Gram? You've read a lot more than I have, though. I've read most, if not all of the Krewe books, but not the other ones.