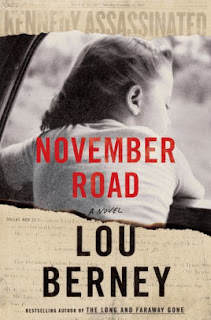 Lou Berney acknowledges his mother's love of a good story in his introduction to November Road. He discusses the many ways she influenced this novel, from her claim he was conceived the night John F. Kennedy was assassinated to her stories of a road trip and an epileptic dog. That introduction is enough to suck readers into this surprising story. It's just too bad the introduction was only in the ARC, not the actual book. I read the ARC, but agreed to participate in the blog tour for November Road because I think this is the book you need to read this fall.

Frank Guidry loves his life in New Orleans. He has gorgeous women, great food, power and influence, thanks to his role as a lieutenant to the powerful mob boss Carlos Marcello. But, Frank isn't stupid. It doesn't take him long to realize Marcello had something to do with President Kennedy's assassination. And, Guidry himself delivered a car to a spot close to Dealey Plaza just two weeks earlier. As some of Guidry's connections disappear, he realizes he's a link between Dallas and New Orleans. And, Frank's as disposable as the other people employed by Marcello. He runs.

Charlotte Roy is stuck in the small town of Woodrow, Oklahoma, where she knows everyone, and everyone knows her husband is a drunk. Her enjoyment in life comes from toying with a camera given to her by her employer, and spending time with her two young daughters, Joan and Rosemary. But, Thanksgiving is it for Charlotte. She can't take it anymore when she has to plead for extensions at the bank, and her husband just drinks away their money. She takes the girls and the dog. And, she runs.

Fate brings Frank and Charlotte together when he passes her on the road after her car breaks down. He's heading to Las Vegas where he hopes an old acquaintance who hates Marcello will help him. Charlotte is on her way to California where she hopes to start over. Frank realizes the assassin looking for him won't be searching for a family man with a wife and two kids. Frank's scheme to pair up with Charlotte, to help both of them, doesn't take a couple things into account. Charlotte is intelligent and funny. And, Frank never thought he'd grow to care about his new "family". Now, Frank may have to make an entire family disappear.

Berney's latest novel is a compelling story that pulls readers right along the road with Guidry. There's humor and tragedy, and loss. The country's loss of innocence is reflected in the lives of Berney's characters. Then, Berney doesn't give readers the expected ending.

Lou Berney's book is about the loss of innocence, but it's also about the impact of a crime. It's a story of the impact of history. There's a point where one of the characters realizes it's too late to stop the changes of the time period, Civil Rights, women's rights. The country was swept along by those changes. JFK's assassination had the same impact. It swept up people all over the country, bringing changes. Frank Guidry and Charlotte Roy are just two of the people swept up in the impact of that crime. They were swept right along in the moving story of November Road.


About November Road
• Hardcover: 320 pages
• Publisher: William Morrow (October 9, 2018)
Set against the assassination of JFK, a poignant and evocative crime novel that centers on a desperate cat-and-mouse chase across 1960s America—a story of unexpected connections, daring possibilities, and the hope of second chances from the Edgar Award-winning author of The Long and Faraway Gone.
Frank Guidry’s luck has finally run out.
A loyal street lieutenant to New Orleans’ mob boss Carlos Marcello, Guidry has learned that everybody is expendable. But now it’s his turn—he knows too much about the crime of the century: the assassination of President John F. Kennedy.
Within hours of JFK’s murder, everyone with ties to Marcello is turning up dead, and Guidry suspects he’s next: he was in Dallas on an errand for the boss less than two weeks before the president was shot. With few good options, Guidry hits the road to Las Vegas, to see an old associate—a dangerous man who hates Marcello enough to help Guidry vanish.
Guidry knows that the first rule of running is “don’t stop,” but when he sees a beautiful housewife on the side of the road with a broken-down car, two little daughters and a dog in the back seat, he sees the perfect disguise to cover his tracks from the hit men on his tail. Posing as an insurance man, Guidry offers to help Charlotte reach her destination, California. If she accompanies him to Vegas, he can help her get a new car.
For her, it’s more than a car— it’s an escape. She’s on the run too, from a stifling existence in small-town Oklahoma and a kindly husband who’s a hopeless drunk.
It’s an American story: two strangers meet to share the open road west, a dream, a hope—and find each other on the way.
Charlotte sees that he’s strong and kind; Guidry discovers that she’s smart and funny. He learns that’s she determined to give herself and her kids a new life; she can’t know that he’s desperate to leave his old one behind.
Another rule—fugitives shouldn’t fall in love, especially with each other. A road isn’t just a road, it’s a trail, and Guidry’s ruthless and relentless hunters are closing in on him. But now Guidry doesn’t want to just survive, he wants to really live, maybe for the first time.
Everyone’s expendable, or they should be, but now Guidry just can’t throw away the woman he’s come to love.
And it might get them both killed.
Social Media
Please use the hashtag #novemberroad and tag @williammorrowbooks and @tlcbooktours.
Purchase Links
HarperCollins | Amazon | Barnes & Noble
© Brandon Michael Smith
About Lou Berney
Lou Berney is the author of three previous novels, Gutshot Straight, Whiplash River, and multiple prize-winning The Long and Faraway Gone. His short fiction has appeared in publications such as The New Yorker, Ploughshares, and the Pushcart Prize anthology. He lives in Oklahoma City, Oklahoma.

Sounds good. I was lucky enough to snag an ARC of this at Bouchercon - it was one of two books I brought home, the final Bill Crider book being the other - so all I need to do is find the time to read this in between the pile of library books I have.

I read the ARC, too.

Although it's not at all like his award-winning THE LONG AND FARAWAY GONE, this is sure to be another winner for him. It is his writing style that will get you now just as it did then.

My only criticism of NOVEMBER ROAD, and anyone who has been married to a drinking alcoholic will agree, is that the explanation for Charlotte’s unhappiness is inadequate. Her reason for suddenly taking off with her two children does not seem to be enough. Berney says that Charlotte’s husband frequently stays out late and comes home drunk but does not show how this has impacted his family’s lives.

But NOVEMBER ROAD is a great story otherwise. It looks like Berney is another go-to author for me.

I wish everyone could read the ARC, Jeff, with that introduction.

Techeditor, I didn't notice that when I read the book, but now that you say that, you're right. It is a great story, though.

Margie, I hope you enjoy it as much as I did!

Loved it, Heather! You're welcome.