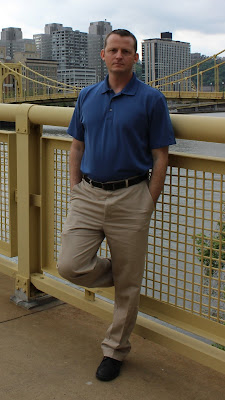 I always enjoy author interviews, and I hope readers do as well. I have an opportunity to meet, and introduce you to authors who might be new to us, even if they've been writing for a while. Today, J.J. Hensley has answers to some of my questions. Hensley's latest crime novel is Record Scratch. Thank you, J.J.

J.J., what can you tell us about your background without then having to kill us to keep it secret?

Surprisingly, my background isn’t really secret at all! What I can’t always get into is the methodology surrounding the duties I performed.

I grew up in West Virginia, graduated from Penn State, and served a few years as a police officer in Chesterfield County, Virginia before I got hired on as a Special Agent with the U.S. Secret Service. During my first couple of years with the Secret Service, I worked out of the Richmond, VA Field Office and conducted investigations into criminal activities such as counterfeiting, check fraud, and other economic crimes. However, during the time I was assigned to the Richmond office I was also traveling quite a bit to protect the President, Vice President, former Presidents, and foreign heads of state.

Eventually, I transferred to the Washington Field Office where I primarily worked protection assignments and something called Protective Intelligence, which is investigating threat cases. After the Washington Field Office, I moved over to the agency’s Intelligence Division where I did advance work ahead of Presidential trips and conducted threat assessments and interviewed those who might have a special interest in the President. I also spent a lot of time assessing and classifying individuals to determine how serious of a threat they might present to one of our protectees. I did a lot of other stuff dealing with Technical Security (looking for things that go “BOOM”) as well, but that’s the gist of my experience in the Secret Service. After that, I moved to Pittsburgh, PA where I helped train federal background investigators. Now I work for another government agency, I live near Savannah, Georgia, and I’m based at the Federal Law Enforcement Training Center near the Georgia coast. Life is good!

Would you introduce us to Trevor Galloway?

Trevor is my favorite out of the protagonists I’ve created. He’s a former Pittsburgh narcotics detective who, through no fault of his own, became addicted to heroin and then pills. The police department let him go and he ended up being an unlicensed private investigator. I gave him his first private job in a novel called Bolt Action Remedy and readers really took to him, although I wasn’t sure that would be the case because he’s stoic, can have a quiet temper, and is extremely complicated. Due to past trauma he’s experienced, his battle with addiction, and some other factors, he’s got this itsy-bitsy problem with seeing the occasional hallucination. This creates all sorts of problems when he’s got people after him or believes he witnessed a crime. Although he’s honest to a fault, he’s not always the most trustworthy protagonist.

Tell us about Record Scratch, without spoilers. 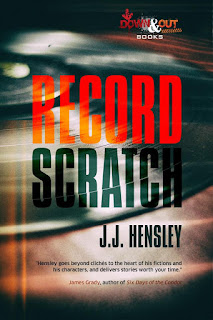 Trevor Galloway has been hired to solve the homicide of 1980s rock and roll legend Jimmy Spartan. Spartan’s sister not only wants the killer found, but wants Galloway to recover her brother’s final recordings which consist of twelve songs on a vinyl record. Spartan’s sister meets with Galloway, hands him his payment, and the promptly kills herself. Out of a feeling of obligation more than anything, Galloway begins to look into the cold case and quickly finds himself immersed in part of the music business few ever consider. He makes new enemies, meets a few old rivals, and is reunited with an old flame. Of course, he’s not exactly certain which ones are real.

Record Scratch is divided into 12 Tracks (Chapters) and each song tells part of Jimmy Spartan’s final story while the title hints at the action that will play out in the chapter.

As humans, we’re all flawed, but you seem drawn to flawed heroes. Why?

One of the main reasons I began writing was because I was tired of reading books in which the good guys were 100% good and the bad guys were 100% evil. I strive for authenticity in every chapter I put together. If a career in law enforcement and national security has taught me anything it’s that there is a lot of gray space in the world and decent people make huge mistakes. It’s weird. Sometimes, I find myself more comfortable around people I know are a bit shady because at least I know what to expect. People who seem too perfect make me wary. I don’t know of any adult who is completely good and I never trust a saint.

Everyone’s publishing journey is different. Would you tell us about yours?

In 2010, I cranked out a novel titled Resolve. I think the first draft took me about three months to complete and I had queries out to agents after five or six months. By the end of the year, I had an agent and by January of the next year I had a deal with a small press. The book got great reviews, but wasn’t making many waves until it got named as a Thriller Award finalist for Best First Novel. Then came a Suspense Magazine award and some other accolades. That led me to another book deal which eventually led me to my current publisher, Down and Out Books. So, basically every novel I’ve written has ended up being traditionally published. I would love to say it happened because of an abundance of talent, but there are so many great writers out there who have fantastic manuscripts rejected by large and small publishers and then there are some highly-questionable manuscripts that end up being placed with one of the major publishers. So, I consider myself extremely fortunate.

What has been the highlight of your crime fiction career so far?

I’m tempted to say the Thriller Awards ceremony. I should say the Thriller Awards ceremony. But, my highlight hasn’t happened yet. I know I have a readership out there. I know there are people who buy my books. However, I have never—not once—walked into an airport or Starbucks to see someone reading one of my novels. Never. I really want that to happen although I don’t know why.

One time I was at the Carnegie Science Center in Pittsburgh and I was sure I saw a guy carrying a hard cover copy of Resolve from the café. I nearly pulled a hamstring chasing that guy down. By the time I caught up and got close to him, I realized it was some non-fiction history book. Damnit! I probably wouldn’t have even said anything to him if he would have had my book, but… DAMNIT! In the meantime, I keep trying to convince all those people with iPads and Kindles in front of them at Panera are reading my books, but I know they’re probably playing Candy Crush or watching porn. DAMNIT!

What’s in the pipeline for you right now?

I’m working on what will be the third Trevor Galloway novel, currently titled Forgiveness Dies on the Vine. It should come out sometime in late 2019. I also occasionally write short stories that end up in anthologies and I’ve got one of those that will be published in an anthology sometime in 2019.

What authors influenced you?

What author or book do you think is underappreciated?

I’m a huge advocate for small press books because they are honestly some of the best and get very little marketing support. Anything from Down and Out Books, Midnight Ink, Crooked Lane Books, Polis Books, or any of the other truly independent publishers is likely more original than one will find with one of the Big Five publishers.

I’m a librarian, and I always end with this question. Do you have a story you can share about a library or librarian?

If it were not for librarians in western Pennsylvania, my sales numbers would be half of what they are. When I was first getting started in the business, I sent out emails to some of the libraries near where I was living in the Pittsburgh area. I mentioned I had a novel out and would be willing to come speak to book clubs or discussion groups, or whoever would listen to a first-time novelist. I spoke to a few small groups and then a library book club or two read my book. Then the librarian grapevine got to work. The next thing I knew I was in demand and never had any issue getting an event at a library in the Pittsburgh area. By the time my second novel came out, it wasn’t uncommon for me to show up at an event where I would speak to fifty or more people and then sell and sign books. It was amazing. Now I live the Savannah, Georgia area and hopefully I can establish a similar relationship with librarians here.

Lesa, thanks for interviewing J.J. and letting us know about his books. I'm always looking for new series to try and to suggest to others. Now I have another! What an interesting background - my Dad was an officer with the Texas state police and he worked in intelligence. I think that has given me a different perspective on individuals who choose that sort of career. I agree that the small publishers certainly do a great job of bringing very special books to us. And, I love libraries, of course. LOL

Lesa, thank you for this outstanding interview with J J Hensley. I immediately looked to find out if my library carried his books. They have four titles. Of course they are in other towns and have only one copy of each. At least they have some. I placed a hold on the first book that he wrote Bolt Action Remedy. I don't know how long I will have to wait. I am wrapped up in the PJ Tracy books so I won't be hurting for something to read.

Have a outstanding week.
Hugs

My pleasure, Kay. I enjoy discovering more about authors and doing the interviews. Sometimes, I just need to find time to sit down and do them. You're right. Your father's experiences would give you a different viewpoint. And, as to libraries... (smile)

Oh, good, Charlotte. I'm glad you're enjoying the Monkeewrench books. And, I'm happy your library has some of Hensley's. I hope you enjoy them when they come around!

Thanks for the interview!

You're welcome, J.J. Thank you!