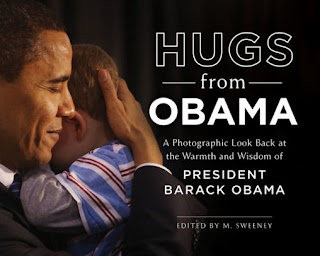 This post isn't what I planned for today, but I received this book in the mail yesterday. It's a quick read. So many of us could use the book M. Sweeney edited, Hugs from Obama: A Photographic Look Back at the Warmth and Wisdom of President Barack Obama.

Hugs from Obama is a "photographic tribute to his compassion and warmth". There are pictures of the President with children, hugging John Lewis, meeting with the Dalai Lama, with his family. There are pictures you'll recognize, along with quotes from speeches he made throughout his presidency. The book includes lines from his speeches at conventions, from inaugural addresses, from his farewell address. The chapter titles emphasize the tone of the book; "Embracing a Legacy", "Leadership", "Unity", "Hope and Change", and "Progress".

In so many speeches, President Obama touched on the past while emphasizing the present, and, sometimes predicting the future. In fact, he seems to speak to the tone of the country right now. "Disagreement cannot mean dysfunction. It can't degenerate into hatred."

There's quite a contrast between the current man in the White House and "President Obama's enduring optimism and heartfelt concern for others". His gift for mourning with others and celebrating the future is evident in all the pictures. There's a warmth and generosity in his smile and words that is lacking right now.

Hugs from Obama is a charming gift book. It's a book for all of us who are mourning, or someone who needs a slight push of encouragement to keep going right now. President Obama had thoughtful words for so many situations. But, here are three words to remember in the next several weeks, and to  always keep in mind. "Don't boo, VOTE."

*****
FTC Full Disclosure - I received a copy of the book from the publisher, with no promises made that I would review it.

I found it in my statewide library catalog and put it on my list. Thanks.

You're welcome, Gram. It's a small book, but gorgeous photos. Sad, though.