The Guilty Dead by P.J. Tracy 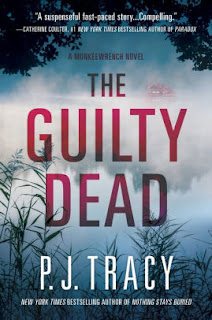 A new Monkeewrench novel by P.J. Tracy is always a treat. While the mother half, P.J., of P.J. Tracy died in 2016, Traci successfully keeps the series interesting. Some will want more of the Monkeewrench team in the current novel, The Guilty Dead. As a fan of the police procedural aspect, I was perfectly satisfied with the latest book.

A year after a junkie is murdered in Hollywood, that death kicks off a crime spree in Minneapolis. Homicide detectives Leo Magozzi and Gino Rolseth catch the case when the junkie's father dies. Gregory Norwood's death appears, at first glance, to be a suicide, but because the Minnesota businessman and philanthropist died of a single gunshot to the head a year after the death of  his son Trey, Magozzi is suspicious, and pushes the crime scene investigators to look further.

While he and Gino focus on Norwood, Magozzi's partner, Grace MacBride, and her Monkeewrench team of computer geniuses are working on a prototype for a new software program that can track terrorist threats. Monkeewrench warns of a local plot, but it's Magozzi who connects the dots to a bomb at the local FBI offices, a building also occupied by Norwood's attorney. Leo also realizes Grace, pregnant with their child, is on site at that same building.

Tracy combines the best qualities of a fast-paced thriller with an intricately plotted police procedural in this intense book. At the same time, fans of the series will welcome the continuing story of the relationship between Leo and Grace. As always, there's a large cast of characters, but those of us who continue to follow the compelling Monkeewrench novels will have no problem following the story.

I always enjoy the Magozzi and Gino sections of the books as much as the Monkeewrench sections, if not more.

I haven't heard about the series, but your review triggered something in me! Will take a look at Goodreads and add them to my TBR :)

Although I have read all of their books from the beginning this was one I had to finish in three days....it was just hard to put down!! Glad to see the series is continuing. Will be hard to wait another year for the next one.

I'm excited about trying this one. Just picked it up on audio for both my husband and I to listen to on an upcoming trip. We'll loved all the books and this is a series and author that we share. We don't have all our author-love in common, but there are a few. P.J. Tracy is one. Now if we could just get Chris Grabenstein to write a few more Jersey Shore books - I've missed Ceepak and Boyle.

Right there with you, Jeff. Gino's life! They are such an interesting pair. And, I love the police angle.

There have been a couple I wasn't excited about, BiteintoBooks, but, overall, I love the series. Start with Monkeewrench, and let us know what you thought.

This one was a quick read for me, too, Pat. I really enjoyed it.

Darn the fact that Chris is so successful with his juvenile books. I'd like more Ceepak and Boyle, too, Kay. They were starting to get a little flat, though, by the end of the series.

Lesa, you did it again. In a good way.
I read about the authors.
Sad about the lost of the mom. She passed away the same month and year as my beautiful daughter, who was only 56 years old. As you very well know the feeling of lost.
I am now reading a sample of their first book. So far so good. As if Ineed another series to read. 🙃🙃
I guess if you didn't write such good reviews I would miss out. Since you are e best I keep adding to the list.

Have a wonderful weekend.
Los of hugs and pets for the fur babies.🐈🐈🐈

Oh, you need a new series. You're almost finished with Betty Webb's Lena Jones one. And, you should be able to get these from the library because the series has been around for a while.

I know. The loss of your daughter will always be with you. Fortunately, so will the feeling of her love.

Thank you! Josh and I have spent almost the entire afternoon cuddling.

I love this series and just finished this one. She says there are more in the works and I am looking forward to those.

Me, too, Gram. I think she's doing an excellent job on her own.