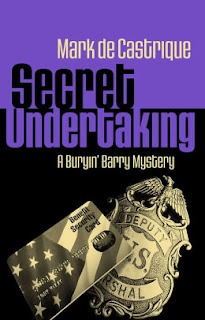 After I read a couple of Mark de Castrique's Sam Blackman books, I quit the series. But, the seventh Buryin' Barry mystery, Secret Undertaking, made me go back to pick up the first in this series. Dark humor, that western North Carolina small community setting, and the appealing characters drew me in. It's that humor that's so rarely done well that appealed to me. And, you don't need to have read the earlier books in the series if you want to pick up Secret Undertaking.

"Buryin' Barry" Clayton is the owner of the local funeral home in Gainesboro, North Carolina. He's also a part-time deputy for a very shrewd sheriff, Tommy Lee Wadkins. But, Barry never expected Tommy Lee to fall for Archie Donovan's latest scheme. The insurance agent wants to ride on the Jaycees float in the Apple Festival parade to raise money for the Boys and Girls Clubs. Barry can arrest him, and he'll spend time in jail, trying to raise the $10,000. With Barry on the float, Tommy Lee is closest to the action when a local man shoots at the parade's grand marshal, the NC Secretary of Agriculture, Graham James. But, it's Barry's elderly uncle who barrels in to save James' life, and ends up injured himself. Barry rides in the ambulance to the hospital, so he misses the rest of the day's excitement.

Within the same hour, the body of a local convenience store owner is found in his store. And, he has the dead gunman's food stamp card in his wallet. It's Archie's loony scheme to be arrested that puts him in the right place at the right time, in a cell next to the gunman's drunken son. A local investigation into food stamp fraud is big enough to cause problems for the Laurel County sheriff's department. But, there's another issue. While bodies pile up, the U.S. Marshals are hiding two people in the Witness Protection Program in the county. And, Barry and the sheriff wonder if there's a connection between their two problems. And, Archie is only one possible connection.

Secret Undertaking is a complex, intriguing mystery. There's a believable cast of interesting characters.I loved the relationships Barry has with his family and his boss. The people and the humor will draw me back. That humor! Just one more reason to pick up this book, or the first in the series, Dangerous Undertaking.

I love the fact that you went back to the first in the series and are encouraging us to do the same, even if we read this one and don't get to the ones in between. And as this is a PP published book, I ought to at least give it a try. As we know, PP rocks!

You're so right about that, Kay. PP rocks!