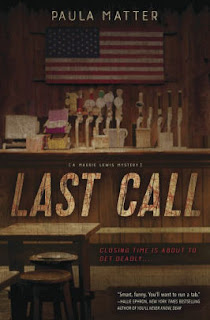 Last month, I interviewed Paula Matter, author of the debut mystery, Last Call, http://bit.ly/2OEesvq. Just this week, I had the chance to read the book, and there's so much I like about this book. I could have used a list of characters, but bartender Maggie Lewis and her story were fresh and original.

Maggie Lewis has been the bartender at the VFW in North DeSoto, Florida for five years. She's a short, middle-aged, grumpy widow, but, most of the time, she enjoys the hours she spends with the regulars at the bar. Jack Hoffman has always been a pain, though. He complains about women in the bar, Maggie as a bartender, and every other issue that comes up. After writing his complaints in his notebook, he takes those problems to the board. Despite Jack's behavior, Maggie certainly wouldn't want the man dead. Why is she the main suspect when Jack's found murdered in his truck?

Maggie had her first Saturday night off in five years when a younger woman is hired for the bar. Of course, she has no proof she was home in the middle of the night. And, one of Maggie's hair scrunchies was found in the victim's truck. Maggie has no confidence that the police chief, Bobby Lee, can find the real killer. After all, he didn't find the killer when Maggie's husband was murdered two years earlier. Now, she's suspended from her job while Bobby Lee investigates. As her debts pile up, Maggie knows she's going to have to do some investigating herself.

Maggie lacks the social skills to be a successful interviewer, but her tenant, an ex-cop, provides some guidance. It's all a learning experience as Maggie struggles to avoid antagonizing possible witnesses, and, even worse, a possible killer.

As grouchy as she can be at times, Maggie is an appealing character. Perhaps it's because she lacks social skills and grace that the reader feels for her. Here's a woman struggling to make ends meet after her husband's brutal killing. She works every night, on her feet in a bar, and takes on house cleaning jobs, knowing the women look down on her. She's desperate to clear her name, and friends have to restrain her from jumping in at the wrong moment. It's not appropriate to ask questions just before the funeral service starts. Several times, she drinks too much, a situation that causes problems for her.

A VFW in northern Florida is an interesting setting for a mystery. As I said, I could have used a character list, though. There were a few too many men who had secrets, and it wasn't always easy to remember who was who. But, Maggie herself is a memorable character, and I'm looking forward to her next story.

*****
FTC Full Disclosure - The publicist send me a copy of the book, hoping I would review it.

I've got this one on my list and am meaning to try it, Lesa. As you say, a unique setting. I'll keep in mind that I need to pay attention to the characters. Wonder if this will be a series?

It is the first in a series, Kay. Like you, I kept meaning to get to it.