Hitting the Books by Jenn McKinlay 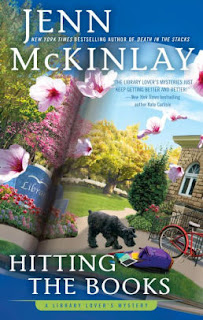 Although I missed a couple in Jenn McKinlay's Library Lover's mystery series, it's always satisfying
to return to Briar Creek, Connecticut. It's like meeting up with old friends, Library Director Lindsey Norris, her boyfriend, Sully, Captain Mike Sullivan, her children's librarian, Beth, and all the members of Lindsey's crafternoon group. With developments in Lindsey's personal life, Hitting the Books is even more satisfying for those of us who are rooting for her.

Lindsey's trying to avoid a baby hand-off, so she's watching out the library window when an out-of-control car hits the local tennis coach, and speeds off. She and two other witnesses have conflicting accounts to give to Police Chief Emma Plewicki, but Lindsey's sure that car aimed at Theresa Huston. When there's a second attempt on Theresa's life, Lindsey wonders if Theresa is the target, or her wealthy fiance. Anyone who knows Lindsey Norris knows she won't be able to keep her nose out of the investigation.

This time, though, the police chief wants Lindsey's help. There are library cds found in the abandoned, stolen car, and Plewicki hopes they'll be a clue to the killer. Before the police chief can even get a subpoena for library records, her suspect is found dead. And, Lindsey's answers only lead to an amusing scenario.

McKinlay's latest Library Lover's mystery is delightful with hints of the gothic. There's a figure at the window, and a couple other moments right out of gothic stories, ones that I won't reveal because of spoilers. Hitting the Books is another one of Jenn McKinlay's entertaining mysteries with likable characters, and a dislikable villain. Add just a touch of romance, and it's a charming cozy to check out.

I was lucky enough to get to read an ARC of Hitting the Books. It’s a good one.


Thanks for sharing. I opted to signup for http://usabookreviewers.com/ to start, to see how it all worked out. Hopefully, I'll be posting a results post in a month or two as well.

Emma, I'm not sure exactly what you're saying. Can you explain a little more?

I'm glad other people have had positive experiences with https://dogearedreview.com/ too. To tack on two cents: I've had a really great experience with them so far-- I've had over 60 reviews and 90 ratings. Not sure on my stats yet, but I'm so, so glad I decided to do this!