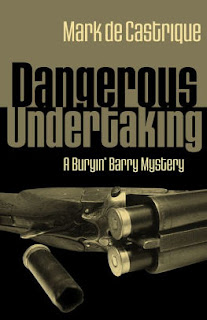 When I read the seventh Buryin' Barry mystery, Secret Undertaking, I liked the cast of characters enough to go back and pick up the first in the series, Dangerous Undertaking. Mark de Castrique is skilled in introducing a new series. This reader, at least, felt as if I had dropped into the middle of Barry Clayton's life, and was just re-meeting people I had met before.

Barry Clayton moved back home to Gainesboro, North Carolina from Charlotte where he'd been a police officer, a grad student in criminal justice, and married. That's all in the past now. His father has Alzheimer's, and Clayton's mother and uncle, and the community, need him as an undertaker. He's at the cemetery where Martha Willard is to be buried when Martha's grandson Dallas Willard shows up, shoots his brother and sister, and then aims at Barry, shouting, "Take a message to my grandmother. Tell her they tried to take her land. Tell her I love her." Barry survives, wounded in the shoulder.

Sheriff Tommy Lee Wadkins doesn't mind recruiting help from the hospital bed. He knows Barry isn't cut out to be only an undertaker and funeral director. Clayton assists with the hunt for Dallas, even while he handles a child's death and spends time with his family and his girlfriend, Dr. Susan Miller. Wadkins introduces Barry to a moonshiner and a biker, all part of the mountain community.

Dangerous Undertaking is an interesting mystery, but it's the characters who will draw readers back. Barry Clayton is trying to find his place back in his childhood community, and there are memories and people who will bring back those connections. It takes him time to realize what the crazed Dallas Willard seemed to already know, "Family is family." No one hurts you like family, and there's no love like family.

Lesa, I just finished the first chapter of a sample copy of this book. I liked what I was reading. Stopped and checked to see if the library has this series of books. They do. They will come from other libraries, that is ok. It seems all my books come from other libraries anymore. I will be able to do the same thing with the PJ Tracy books. I have three already on hold. It will probably takes at least a week before they start arriving. I will hold up on requesting a hold on the Mark De Castrique books.

Yes! I was hoping you could get the P.J. Tracy books. And, I think you will love the Buryin' Barry ones, Charlotte. Definitely happy reading time.

Lesa, couldn’t wait, had to place on hold the first book written by Mark DeCastrique.

Dangerous Undertaking just went on hold at my library...