A Willing Murder by Jude Deveraux 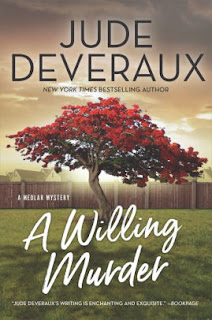 I won't say bestselling romance author Jude Deveraux has written herself into her first mystery, but the wonderful Sara Medlar character sounds familiar. If you read Deveraux' website, she's living in Florida, loves boxing and weightlifting, and drives a Mini Cooper. Sara Medlar is a retired romance writer, lives in Florida, boxes, lifts weights, and drives a yellow Mini Cooper. I hope Deveraux has as much fun writing the character as I did reading about her in A Willing Murder.

Sara Medlar bought a big mansion in Lachlan, her hometown, and hired Jack Wyatt, grandson of her childhood sweetheart, to remodel it. But, she's rattling around in that house. When Jack breaks his leg in a tragic accident, she invites him to move in. Then her niece Kate Medlar accepts a job as a realtor in Lachlan, and Sara is excited to offer her a suite in the house. But, Kate's just a little suspicious of Jack's motives. However, Kate's not there long when the trio finds something they all have in common. They all troop over to check on Jack's properties when a tree goes down. Sara has her camera, but it's Kate who accidentally backs up into a skeleton. Twenty years earlier, someone planted a poinciana over the freshly dug grave of two murder victims. And, Jack knows just who they are, Verna and Cheryl Morris.

Although the local sheriff has little interest in opening a cold case when he suspects Jack's father was the killer, Sara, Jack, and Kate feel otherwise. They're all determined to snoop and find justice for the dead women. But, their best intentions go awry when some of their expected sources are killed. Someone is just one step ahead of the trio, someone who is adept at throwing suspicion on others. And, in a town sharply divided by money and class, the community would like to forget the murder of two women with reputations.

Deveraux has been praised and won prizes for her romances. Her debut mystery is just as delightful. It's an amusing, witty mystery that never loses sight of the reason for the murder investigation, or the tragedies that arise because of secrets.The characters are well-developed and engaging. It's the banter-filled conversations between the trio that make this mystery shine, though. Kate and Sara are sassy, determined women. And, there's just enough of a romantic spark to add interest. A Willing Murder is a solid, entertaining mystery. I'm looking forward to the February release of the next Medlar Mystery.

I’m never going to catch up on my TBR pile

Now on the hold list for one of three copies in large print. Local library is also getting 20 copies in regualr print where the hold list is 42 folks. Apaprently, there is interest. :)

I would love to win a copy of this book. Thank you so much for this chance at your giveaway. pgenest57(at)aol(dot)com

Just placed a hold on this at the library, am 4th in line. Can't wait to read it.

I didn’t realize she was still writing. Thanks for posting!

You're welcome, everyone! It is fun. Unfortunately, Paula, I'm not giving away a copy of this book. I'm sorry.