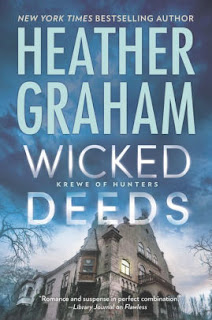 I can always count on one of Heather Graham's Krewe of Hunters suspense novels to drag me back into reading. I should just stockpile the books so that I know I have something I'll always want to read. I'm a little behind, but it doesn't matter.Wicked Deeds is one of my favorites in the ongoing series.

Special Agent Griffin Pryce and historian/writer Vickie Preston are meandering their way to Alexandria, Virginia. They have a little time before Vickie reports to Quantico for training. She's going to join the FBI, and then the elite team of agents who make up the Krewe of Hunters. The agents all have some sort of paranormal abilities, to see or connect with the dead, and they use those abilities in solving crimes.

Vickie has already been involved in several cases. In the first, as a teenage babysitter, she was saved by the ghost of the older brother of the boy she was babysitting. He sent her straight to a young cop named Griffin Pryce. Nine years later, she's been instrumental in solving cases in Boston and Salem. Vickie's special ability? She can communicate with the dead in visions while she's sleeping. In Baltimore, in a historic inn, it seems appropriate that Vickie should see Edgar Allan Poe in her dreams.

Nothing is by chance when it comes to the Krewe of Hunters. Although they're on a romantic trip, Griffin and Vickie are the closest to an unusual crime scene. Franklin Verne, a famous action and horror novelist, has been found dead in the wine cellar at the Black Bird Restaurant. It's a restaurant devoted to Poe, and Griffin and Vickie had dinner there the night before. They're not suspects, although the restaurant staff and members of a Poe-related group, the Blackbird society, are. And, the list of suspects is only narrowed by one when another writer is found murdered, in another death similar to one Poe used in a story.

Wicked Deeds is a complex suspense story. While the current crimes with the connections to Poe are interesting, what is even more fascinating is Poe's own story. Historian Vickie Preston teams up with Poe to discover what really happened in his last days alive. Wicked Deeds indeed.

While I've enjoyed all of the Krewe of Hunters stories, Graham's recent books involving a historian and the paranormal are the most satisfying. History and ghost stories seem to go hand-in-hand. There's so much we don't know about the past. And, Poe is the perfect subject for a haunting tale of evil.

Jackie is about three trilogies behind on the Krewe of Hunters books, but she is reading Graham's New York Confidential (hardbacK) series.

I've had many thumbs-up recommendations of this Krewe of Hunters series. I really must get to it at some point. I guess I keep thinking I'll need to read it in order, but it comes in trilogies, right? I know I'd like it. And I say, set your little stack aside and go to it when you're struggling to read. I reread old favorites or sometimes just sample them in order to get myself going again at times. Or watch Inspector Lewis again on TV. Ha! I like Hathaway. ;-)

Jeff, I think of Jackie every time I review one of these books.

You're so right, Kay. I need to go back to this series when I'm struggling. After reading that book, I'm now deep into the one I was struggling with, and I've started a second that I think I'm going to like.

I started with the Harrison Investigations - more than a trilogy - and haven't stopped yet. I just finished Pale as Death and have Echos of Evil on hold at the library. She is one of my favorite writers. I enjoy her other series as well, but not as much as the Krewe.

Gram, I'm right there with you on the Krewe. Love these books.